Azerbaijan has declared war on UNESCO 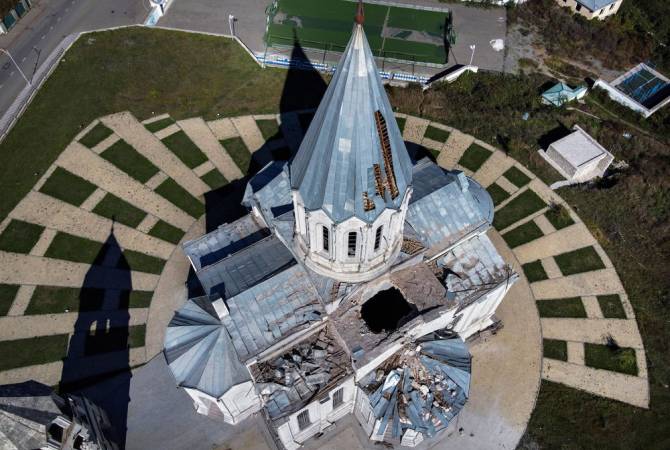 
YEREVAN, FEBRUARY 11, ARMENPRESS. The Armenian and international community has become concerned with the protection of the rich Armenian spiritual, historical, and cultural heritage found in the territories transferred to the control of Azerbaijan as a result of the recent bloody war unleashed against Nagorno-Karabakh. The OSCE Minsk Group Co-Chairs Russia and France, as well as the EU, have emphasized the importance of protecting the Armenian Christian heritage found in these territories, and have supported the involvement of UNESCO in the process.

As early as November 20th last year, UNESCO Director-General Audrey Azoulay declared the necessity of protecting the monuments of Nagorno-Karabakh and the inadmissibility of attempts to distort their identity. In her statement, she also offered to send a mission to the region to provide technical assistance. The proposal of the Director-General was approved by the member states of the organization, which was reflected in the Declaration of the UNESCO Committee for the Protection of Cultural Property in the Event of Armed Conflict, adopted on December 11th, 2020.

The concerns expressed by the international community are quite understandable and natural, given the attitude of the Azerbaijani authorities towards the Armenian cultural heritage under their control for years. The whole world knows of the annihilation of 89 medieval churches, 584 khachkars (cross-stones), and 22000 tombstones found on the historical Armenian area of Nakhichevan, conducted by the Azerbaijani authorities between 1997-2006. Unfortunately, it is noteworthy that the international community did not take sufficient steps to prevent this barbarism at the time.

In addition to the physical destruction of Armenian monuments, Azeri "scientists" who follow the orders of the Azerbaijani authorities continue their attempts of appropriating Armenian historical and cultural heritage, rejecting their Armenian identity and circulating the anti-scientific thesis of their "Caucasian Albanian" affiliation. Without going into further detail regarding this Azerbaijani anti-scientific thesis or the attitude of the international academic, it nonetheless must be noted that the Azerbaijani authorities utilize it for political purposes, publicly spreading absurd lies. This policy of the Azerbaijani authorities openly violates Resolution 2347 adopted by the UN Security Council Resolution in 2017, which explicitly states the inadmissibility of the distortion of cultural heritage as it is fraught with the risk of a new conflict. (…the attempt to deny historical roots and cultural diversity in this context can fuel and exacerbate conflict and hamper post-conflict national reconciliation, thereby undermining the security, stability, governance, social, economic, and cultural development of affected States.)

The Aliyev regime – which carried out one of the greatest cultural genocides of our time, adopting the terrorist ways of the Islamic State – was not satisfied with the bloody war against the people of Nagorno Karabakh based on ethnic and racial hatred and has now started a war against UNESCO, preventing it from carrying out its mission of protecting cultural heritage in Artsakh. Azerbaijani President Ilham Aliyev and the media outlets serving him have been criticizing UNESCO, accusing the organization of "bias and serving the interests of other countries." It should be noted that this policy of the Azerbaijani authorities is not new, and they have previously obstructed the UNESCO, the European Parliament, and the Council of Europe fact-finding mission to Nakhichevan under various pretexts, thus trying to conceal the massive scale of the crime.

At present, Azerbaijan's obstruction of the mission to Artsakh raises reasonable suspicions that the Azerbaijani authorities, following the example of Nakhichevan, are preparing another large-scale cultural vandalism as a continuation of the policy of ethnic cleansing of Armenians in Artsakh and the elimination of the Armenian presence. During the war, on October 8th, 2020, the Azerbaijani military twice targeted the Holy Savior Ghazanchetsots Church in Shushi with the help of high-precision weapons. Additionally, after the ceasefire agreement signed on November 9th, 2020, by the Prime Minister of Armenia and the Presidents of Russia and Azerbaijan, the dome and the bell tower of Saint John the Baptist Church in Shushi (a.k.a “Kanach Jam”) were blown up by the Azerbaijani military, along with other acts of vandalism. In the absence of appropriate measures by UNESCO and other specialized international organizations, this criminal practice of the Azerbaijani authorities will continue.

Furthermore, it is important to note that Azerbaijani authorities have specifically targeted UNESCO Director-General Audrey Azoulay. The reason is understandable, since Azoulay, unlike her predecessor Irina Bokova, has not been involved in seemingly corrupt, suspicious transactions with the Azerbaijani authorities, and she defends the impartiality of UNESCO and the universal mission of cultural heritage protection. Consequently, the authorities of Azerbaijan, a country among the most corrupt in the world according to international rating indexes, are "upset" that they have not been able to involve UNESCO in their "game", to advance their false agenda.

On various occasions, the Azerbaijani regime speaks of its imaginary multiculturalism, while at the same time systematically destroying the rich Armenian cultural heritage and propagating ethnic hatred towards the Armenian people. It is further worth mentioning that the first Vice President of the country, Mrs. Aliyev, is a UNESCO Goodwill Ambassador. The obstruction of UNESCO's activities in Artsakh has become the latest example exposing the façade of a "tolerant, multicultural" Azerbaijan. It is no longer possible to mislead the international community, as Azerbaijan’s policy of cultural genocide is already a well-known fact for everyone; this explains the attacks launched by Azerbaijan against UNESCO, which are nothing but a confrontation with the the international community and universal values.