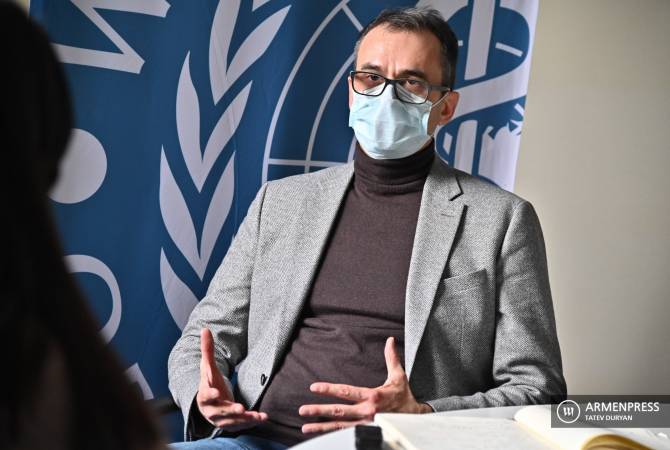 Mr. Zaitsev gave an interview to ARMENPRESS, talking about the fight against COVID-19, the activities done during the recent Artsakh War, the vaccines and other issues.

-Mr. Zaitsev, last year the whole world was full of many challenges and difficulties, conditioned in particular by COVID-19. Armenia’s healthcare system as well had to overcome that virus. In your opinion, what lessons we have learnt within that one year?

-We have learnt quite serious lessons at that period. I think that communication and risk assessment were important. The second lesson was that we learnt to follow the elementary safety rules, such as we wear face masks, disinfect our hands, keep social distancing and so on. I think there have been numerous lessons, one of them is that the disease was something new, a quick exchange of information was needed, which we also managed to solve. WHO is an organization which quickly collects all information, distributes it between the countries and it’s important for these countries to use that. The fourth lesson we have learnt is that many countries, including Armenia must have a powerful healthcare system. The talk is about various functions of that system.

-In your view, how is Armenia overcoming the current situation?

-Each country has its capacities and responds to such cases based on its own capacities. In general, we see that the situation has relatively stabilized, but it’s still early to talk about the final outcome because the disease has not disappeared in the whole world yet. As an organization we are trying to help Armenia with different ways. We have conducted 2 missions, specialized groups from different countries have arrived in Armenia in order to help at the critical moments either with consulting or just providing help.

-Last year, in line with the pandemic, a war has launched by Azerbaijan against Artsakh, and the situation further escalated in Armenia. What were the challenges that time? What steps did the WHO take on that path, how did it support Armenia?

-Both the civilians and the servicemen sustained many injuries during the war. This was a great challenge for Armenia’s healthcare system and doctors especially in that situation. One of the difficulties was that the war erupted during the pandemic which further complicated the work. That great flow of the people, the mobilization further complicated the maintenance of safety rules from healthcare perspective. Armenia was under a double burden – the pandemic and the war. At that period we assisted the ministry of healthcare in acquiring emergency kits. Now as well we continue assisting, there are projects for rehabilitation treatment, such as for psychological health recovery.

-Can the WHO assist Armenia in acquiring vaccines more quickly and in larger doses?

-At this moment active works are underway between the WHO and the government, as well as with other interested agencies, such as UNICEF, World Bank, etc. The works are being conducted through a platform which is called COVAX Facility, which is associated with the WHO. According to this program, Armenia and many other countries will receive vaccines. WHO is also working with other countries at a global level.

-On the sidelines of the fight against COVID-19 ambulance brigades arrived Armenia which has been organized as a result of the cooperation with the European Union and the governments of respective countries. What is the experience as a result of these visits?

-Emergency medical teams arrived in Armenia from Germany, Italy, Poland and UK. These teams are under the auspices of the WHO, they are licensed groups who visit other countries and provide help, share their experience. The important part was that these medical teams were providing care not only to patients, but they were also holding trainings for doctors and nurses.

-Are new cooperation, new deliveries expected in the future?

-Our cooperation has been around the EU DG NEAR project, within the frames of which assistance has been sent and is being sent to Armenia. Different types of equipment, personal protective items directed for the COVID-19 treatment have been delivered here. This year as well we will continue this project.

-Do you consider your policy adopted at this whole period as effective?

-This issue must be analyzed, studied at the final stage of this disease when everything is over. I think our organization should critically view its actions done so far in order to understand the weak and strong sides. In general, our activities in 2020 have been quite effective, however, of course, there are and have been some problems.