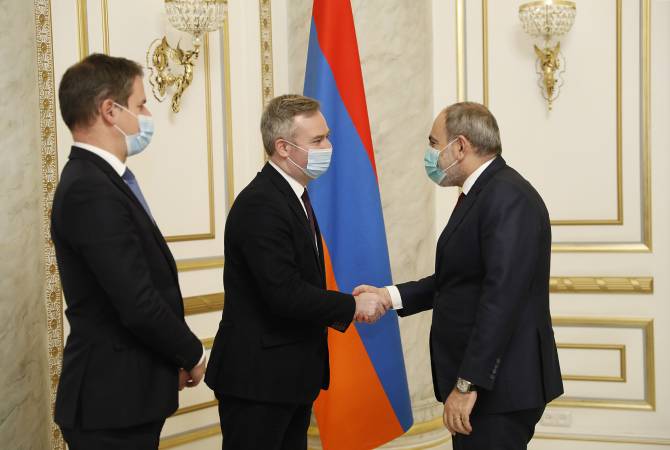 The private talk of the Armenian PM and the French Minister of State was following by an extended-format meeting.

Welcoming the French delegation members, the PM said: “Our meeting is taking place in continuation of the agreement reached with President Macron and is reflecting the unique relations of France and Armenia. High-level and warm dialogue exists and has existed traditionally between our countries, and I want to express our gratitude for the personal involvement of President Emmanuel Macron, Foreign Minister Jean-Yves Le Drian demonstrated from the very first day of the recent war. Of course, we have passed through a very heavy war, had many losses and have a very complex situation as a result. And this visit is very important in terms of resisting the current challenges and also using the existing opportunities. Our discussions and agenda also have economic, humanitarian aspects, and please convey my gratitude to President Macron for our talk and such a rapid response to our agreements”.

In his turn the French Minister of State thanked the Prime Minister of Armenia for the warm welcome and stated that his delegation includes representatives from the French treasury, the French Development Agency, adding that his visit is the continuation of the Armenian PM’s agreements and discussions held with the French President. “It was very important for our President to be able to respond to each of your needs as quickly as possible. In December the talk was about the urgency, and the arrival of several planes delivering aid to Armenia was conditioned by that, which once again shows the friendship between our countries and peoples. After the urgency, currently, as you said, the economic projects in the mid-run and long-run are important, and in this respect I want to thank everyone who are having intense meetings in different agencies for a week”.

Issues relating to the development of the relations between Armenia and France, including the possible support to attracting investments, were discussed during the meeting. The meeting also touched upon the agenda of the bilateral economic partnership. The sides highlighted transportation, water reservoir construction, agriculture, high technologies, digital innovation as prospective spheres. In this context the Prime Minister proposed to consider the cooperation opportunities between the Armenian National Interests Fund (ANIF) and the French Development Agency, and the French side shared this view.

Pashinyan also talked about the expansion of education cooperation, the successful example of which is the activity of the French University in Armenia.

An agreement was reached to form a bilateral inter-agency working communication platform and continue the works over programs of mutual interest.