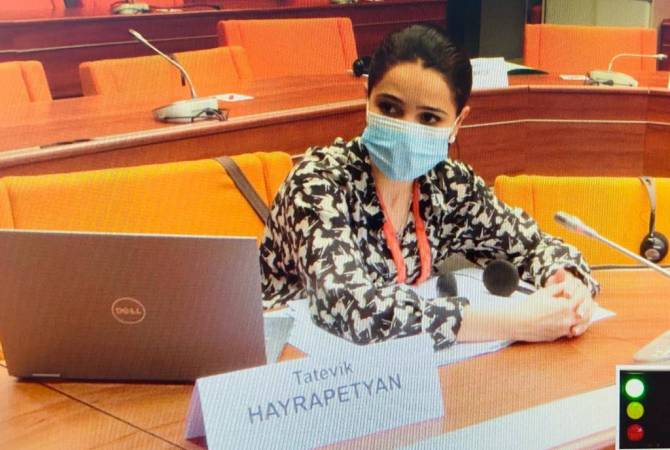 
YEREVAN, JANUARY 27, ARMENPRESS. Member state of the Council of Europe is violating the fundamental human rights and the international law and what should be done for preventing it?, member of the Armenian delegation to the Parliamentary Assembly of the Council of Europe (PACE) Tatev Hayrapetyan said in her remarks delivered at the PACE plenary session.

She noted that two months after the signing of the statement on the ceasefire in Nagorno Karabakh, Azerbaijan is refusing to return the Armenian prisoners of war.

“When we are talking about procedures, I want to ask a question to all of us: what to do if a member state of the Council of Europe is violating the fundamental human rights for years? We have witnessed how Azerbaijan has used the “caviar diplomacy” to hide its dictatorial reality and human rights violations. We had reports on this topic. We all remember the case of Luca Volonte. The latter was sentenced to four yours in prison for taking bribes from Azerbaijani officials. Volonte is just the tip of the “iceberg”, in fact the matter is much deeper”, the Armenian MP said.

According to her, the recent Azerbaijani-Turkish aggression against the peaceful civilians of Artsakh, which was accompanied by war crimes, has been completed with the mediation of the Russian side, however two months after the signing of the statement on the ceasefire Azerbaijan is refusing to return the Armenian POWs.

The ECHR has applied an interim measure regarding the issue of POWs, urging Azerbaijan to provide respective information. Four days later one of the prisoners of war has been brutally killed.

“This is unprecedented and is a gross violation of the human rights convention. As a female lawmaker I also want to emphasize that there is also a woman captive in Azerbaijan. The only fault of my compatriot Maral Najaryan is that she is Armenian and was delivering bread to our soldiers who were defending the peaceful population of Artsakh.

This debate is about values. The CoE member state is violating the fundamental human rights and the international law and I want to ask a question: what to do to prevent it?” she added.