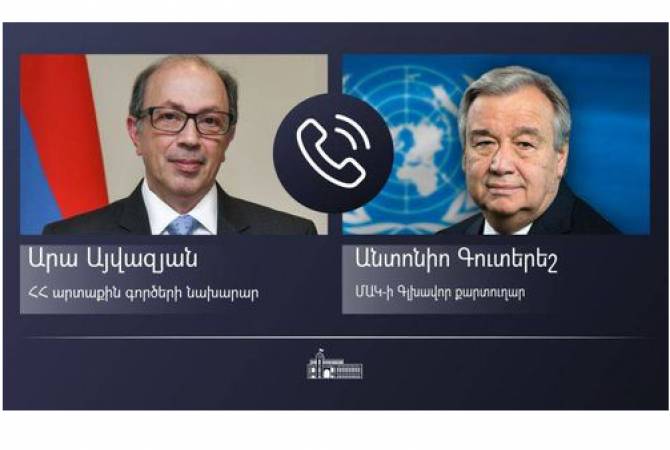 
YEREVAN, JANUARY 13, ARMENPRESS. Foreign Minister of Armenia Ara Aivazian sent a letter to the UN Secretary General Antonio Gutterres on January 12 comprehensively presenting the situation over the Nagorno-Karabakh conflict following the large-scale military aggression launched by Azerbaijan on September 27, 2020, ARMENPRESS was informed from the press service of the MFA Armenia.

In his letter, the Minister notes that amid the unprecedented global health crisis, the violation of the decades-long ceasefire in the region has led to numerous casualties, large-scale ethnic cleansing of the indigenous people of Artsakh, deliberate destruction, desecration and vandalism of the Armenian religious and cultural monuments.

In the letter, the Foreign Minister of Armenia touched upon the cases of violations of the November 9 trilateral statement`s provisions by Azerbaijan, noting that more than a month after the ceasefire was established, Azerbaijan carried out military operations in Hin Tagher and Khtsaberd villages in Hadrut region of Artsakh. It was noted that during the military attack, the Azerbaijani armed forces captured 64 Armenian servicemen, violating Azerbaijan's commitments to maintain the ceasefire established by the trilateral statement.

The incomplete implementation of the Article 8 of the trilateral statement by Azerbaijan was emphasized in the letter, which mandates the “exchange of prisoners of war, hostages, and other detained persons and dead bodies''. It was stressed that Azerbaijan, in fact, refuses to implement its commitment which is a blatant violation of international humanitarian law.

Minister Aivazian drew the attention of the UN Secretary General to the reluctance of Azerbaijan regarding the cooperation with international organizations in cultural heritage protection. “Lasting and sustainable peace in the region could be achieved only through the comprehensive resolution of the conflict that will include the status of Nagorno-Karabakh based on the realization of the right of self-determination of the people of Artsakh”,- concluded the Foreign Minister of Armenia.