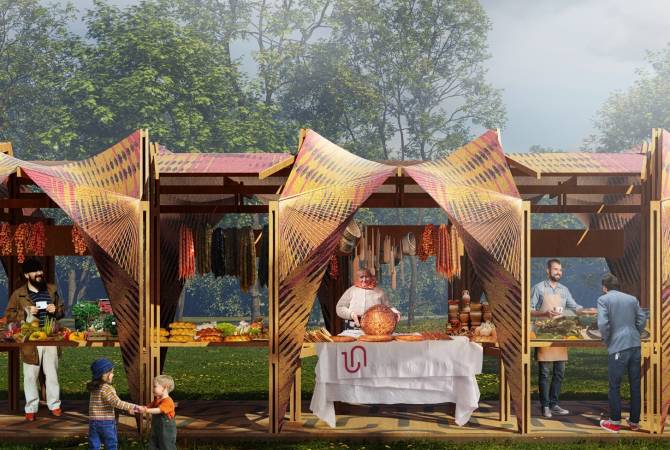 Based on the results of the second round, the jury selected the best from 19 finalists in three nominations. The winner in two nominations at once, namely Standard Architectural Elements and Landmark Architectural Element, became Moscow bureau IND Architects. While designing a Marketplace Pavilion, the architects were inspired by the zigzag elements of traditional Armenian architecture. These cell modules can change their configuration — linear for retail or exhibitions, wavy for food courts and circular for thematic combinations for masters of one craft. The variety of arrangements is achieved by transforming wooden structures with a stretching awning, which in its pattern resembles a woven Armenian carpet. The Marketplace is designed for year-round use.

The concept of Gardening School Pavilion is inspired by the craft history of the city and emphasizes the uniqueness of the national arts. The internal frame made of metal profiles is based on an orthogonal grid and allows the Pavilion to be modular. Sliding partitions transform the interior space for the required format of events, including fairs, vernissage, lectures, workshops and free use. The green area is returned to the Pavilion due to the exploited roof. The Russian-Armenian SULIMAN, RAKOVSKAYA & SOFOYAN became the winner in the nomination Urban Furniture. In the image of Park Bench the architects were trying to find a legend and use the cultural code of Armenia. Modern bench supports made of heavy stone enable you to sit down next to a stranger without disturbing their comfort zone. On the flat front faces of the stone, you can place artistic or informational graphic bas-reliefs, telling people more about this place.

The length of the bench can vary depending on the context, gathering in linear and group compositions. The competition is a part of the integrated development of the park reflecting the city’s identity and conveying the idea of international collaboration. A total of 84 applications were received from 16 countries and 37 cities. Local architects were also actively involved, including two collaborations with Russian architects. An expert jury selected winners by online voting. The assessment criteria included the relevance of architects’ design principles, which are functionality, environmental friendliness, ergonomics and implementation possibility. The jury also took into account compliance with the Terms of Reference, architectural appearance, cost of implementation and solutions for local identity, namely, the adaptation of modern solutions to the cultural context of Armenia. The jury is comprised of renowned experts, including Alexandra Sytnikova, CEO of the consulting bureau ATLAS, Andrey Ivanov, Architect and Researcher, Nune Petrosyan, Deputy Chair for the Urban Development Committee of Armenia, Darius Reznek, Partner at the Dutch design studio Karres en Brands, Francesco Garofalo, Founding partner of landscape bureau Openfabric, Udo Dagenbach, Landscape architect and founder of the bureau Glaßer und Dagenbach GBR, Fedor Rashchevsky, Chief Architect and Partner of OFFCON Bureau, Emma Baghdasaryan, Aide to the Head of Shirak Regional Administration, Yelena Abovyan, Chief Operations Officer of the Initiatives for Development of Armenia (IDeA) Foundation. Ruben Vardanyan, Co-Founder of IDeA Foundation: "Life goes on and, despite everything that has happened, we will build a new Armenia for our children. The restored and re-imagined Friendship Park will become a unique public space, fostering the development of tourism and the city’s infrastructure. In this context, the international competition gave an opportunity to young and talented architects to have their unique input in Gyumri - a city of rich history, culture and traditions. The winners will become co-creators of a new, innovative public space for the city. It is very important, that the people of Gyumri are actively involved in the development of the park’s conceptual design. They have also embraced the significance of the international competition, which, along with setting a new precedent, reinforces the core idea of the park – a symbol of friendship. This project brought people together and this truly will be a park of friendship and gratitude.” Fedor Rashchevsky, Chief Architect and Partner of OFFCON Bureau: “Small architectural forms are not linked to a territory in their significance. This is the language the city speaks with its residents and guests. It is a universal metric of how modern the country is — a developed public urban life that needs an urban environment of high quality, including small forms."

Darius Reznek, Partner at the Dutch design studio Karres en Brands: “What I was most interested in was a successful translation of Armenian cultural identity and local specificity into contemporary architectural solutions. In many ways, the elements of a park are more important than any other aspect of its design and it is a unique opportunity and responsibility to shape them.” Francesco Garofalo, Founding partner of landscape bureau Openfabric: “The main criteria I have followed are the creative power of the proposal and the compositional quality. A number of proposals are very inspirational, fresh and able to inspire: would be great to see them realized. Small architectural forms are interesting in a broad sense. Their limited dimension makes them feasible with a limited budget.” The park is located in the northern part of the city, between the historical center and residential and industrial areas. The central street links all the main sights and public spaces of Gyumri. The renovated park will become the first modern green area in the Republic of Armenia remaining a significant place and attraction point in Gyumri on the way popular among locals and tourists. * About IDeA Foundation Initiatives for Development of Armenia (IDeA) Foundation is a private, non-profit foundation for creating long-term programs for sustainable development of Armenia. IDeA has long-term positive socio-economic impact for Armenia by partnering with the government, international organizations, private investors and local communities. The key elements of the development concept are – increasing prosperity, harmonious social environment, cultural development and preservation of the national identity. Gyumri Development Program has a special strategic importance for tourism and urban development.