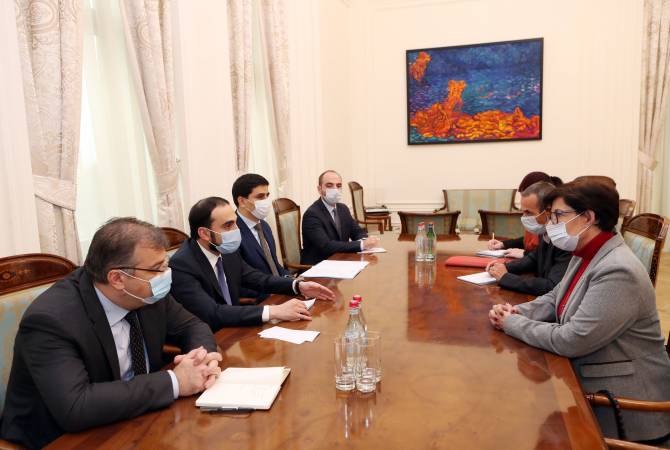 The deputy PM thanked Claire Meytraud for the works done in Armenia and expressed hope that the comprehensive partnership with the ICRC Delegation under the leadership of Thierry Ribo will continue and will further expand.

The ICRC officials thanked the Armenian agencies for the support which enables to efficiently conduct the mission of the organization. They also introduced the process of the ICRC activities.

The sides discussed issues relating to the exchange process of prisoners of war, the search for missing in action and the bodies of the dead. Deputy PM Avinyan highlighted the ICRC support and mediation role, as well as the urgency of accelerating the aforementioned processes. He said the Armenian side fully follows the civilizational rules envisaged by the Geneva conventions and their additional protocols, and will continue to follow the spirit of the conventions.

Avinyan touched upon the cases of violations of international humanitarian law by Azerbaijan both during the war and after that. He expressed concerns also over the obstacles created by the Azerbaijani side in the works on return of captured persons, search for missing in action and the bodies of the dead.

He also presented the main principles and mechanisms proposed by the Armenian side on the exchange process of POWs.

The meeting sides also discussed the humanitarian situation in Artsakh and issues relating to the need assessment of the Artsakh residents.