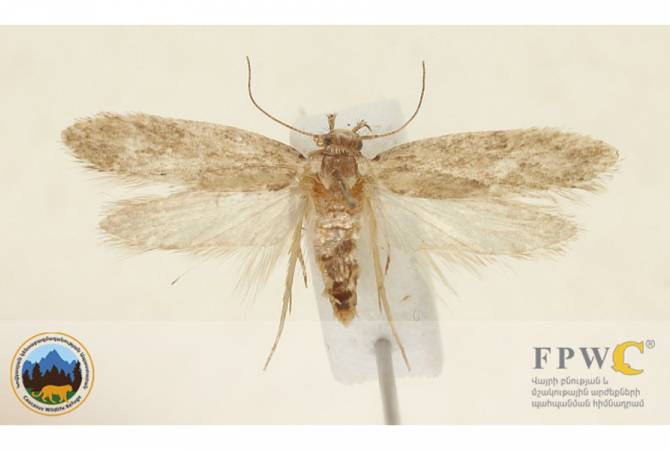 
YEREVAN, NOVEMBER 30, ARMENPRESS. Scientists have discovered a moth species unknown to science in Armenia, the Foundation for the Preservation of Wildlife and Cultural Assets (FPWC) said in a news release.

The scientists who discovered the specimen are experts from Germany’s Institute for Ecosystem Research, who were conducting research in CWR, Urtsadzor’s site, located in Ararat region.

“During their field trips, the scientists have implemented their research through scientific methods and have found a moth species, which was not known to inhabit Armenia before. The scientific article on this valuable finding was published recently. Initially the state of preservation of this specimen showed that it generally corresponded with external appearance of D. kondarella and D. gaalhaszlerae, however further differential diagnosis of organs, as well as DNA – barcoding showed this was a specimen unknown to science before”, the organization said.

“One female specimen was collected in year 2020 in Armenia. The moth has been collected end of May, from Armenia, Ararat Province, Vedi river valley, Urtsadzor, light trapped near CWR Eco Lodge, 1250m a s.l. by scientists H. Roweck & N.Savenkov. Depressaria urtsadzorensis – is the name given to the specimen that is derived from Urtsadzor, a village in Armenia, Ararat Province, Vedi river valley, where the type specimen was found. It is located in an area recognized as Prime Butterfly Area, so the choice of this name intends to underline its importance for biodiversity research and protection.”