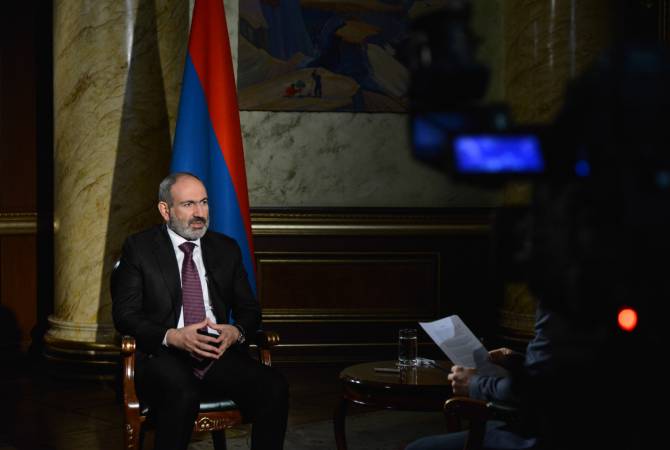 
YEREVAN, NOVEMBER 25, ARMENPRESS. Prime Minister of Armenia Nikol Pashinyan has commented on the ongoing protests in Yerevan demanding his resignation, stating that the calls voiced by the opposition have not been widely spread within the Armenian public.

“There is, of course, a domestic political tension. But the truth is that the calls voiced by the opposition were not widely spread within the Armenian public. And I think that the issue of power which has been formed by the people can be solved only through the people’s expression of will. Currently the fact is that the calls voiced by the opposition do not have the support of the Armenian public. And this should be recorded. Now the most important task of the government and also all political forces of Armenia should be the restoration of complete stability and security in Armenia. I mean not only the domestic, but also the external security”, Pashinyan said in an interview to TASS.

He reminded the roadmap released by him recently, stating that works must be done for the stabilization of the situation in the coming 6 months.

“I mean the political situation, the situation in the security field, the economic stability. And after that we will consult with our public, the people and the political forces and will make a decision on further developments and actions what we need to do in the future. This doesn’t mean that everyone is satisfied from the current situation both in the context of the Nagorno Karabakh conflict, and the situation in Karabakh, etc. Frankly, I am also not so satisfied. We all are not satisfied with the situation we have today. But we need to understand what alternatives we have”, the Armenian PM said.

He noted that works must be done not to further worsen the situation. “We need to work and focus on these issues. This doesn’t mean that the government believes that everything is well. Quite the contrary, we believe that firstly it is necessary not to escalate the situation. Now we have many issues connected with the return of the citizens of Artsakh, Nagorno Karabakh to their homes. Some social guarantees should be provided for the citizens of Nagorno Karabakh and for those who have lost their homes. The socio-economic situation should be stabilized in Armenia. Unfortunately, the coronavirus pandemic continues both in the world and in Armenia. In other words, our common goal should first of all become the stabilization of the situation, and after that we must make a decision on what to do”, Nikol Pashinyan said.