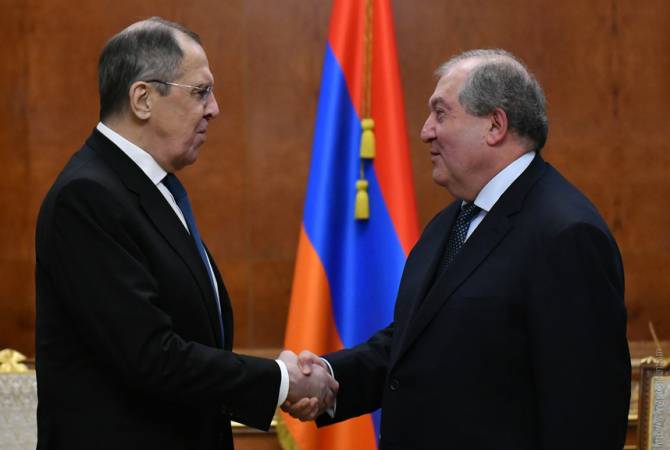 Welcoming the Russian FM and his delegation in Armenia, President Sarkissian stated in particular: “You have arrived in Armenia at a difficult time. It’s a very difficult period, it can be called as a crisis period. There are big problems in the economic sector, it’s a difficult post-war situation, our problems are also psychological, unfortunately, there is also the coronavirus and many other issues. In general, the situation is also difficult in the foreign policy field”.

President Sarkissian thanked the Russian FM first of all for what he is doing for Armenia, the region during these years. He asked to convey his and the Armenian people’s gratitude to the Russian President for the support provided during these difficult days. “No matter where Armenians live in, they all know that if your and Vladimir Putin’s efforts didn’t exist, today we would have continued to lose young lives”, President Sarkissian said. “In the first days of the war we knew that all efforts of the leadership of Russia, the President personally were directed for ceasing it. We were once again convinced that the real friendship is seen at difficult moments”.

The Russian Foreign Minister thanked for the meeting and stated: “The talks which are being held here today enable to observe all sectors of ties and agree on an issue on how to deepen them, make them more effective firstly for our citizens. We are grateful, and the President has asked to convey to you his gratitude to the appreciation expressed by you and majority of politicians and citizens in Armenia over the joint statement signed on November 9 by the leaders of Armenia, Russia and Azerbaijan. As you said, that statement allowed to stop the war. For first time following so many agreements, the ceasefire is really in force because there is a ceasefire control mechanism, that is Armenia’s and Azerbaijan’s agreement, the implementation of peacekeeping operations, they are already fulfilling their mission by ensuring the ceasefire regime and providing humanitarian support to the population of Nagorno Karabakh. At the order of President Putin an inter-agency humanitarian response center is being created to help solving the humanitarian issues of the population. We are actively engaging also the international organizations, the Red Cross is working, as well as the UN agencies on this work”, he said.

The Armenian President and the Russian FM discussed other issues of the Armenian-Russian cooperation agenda.