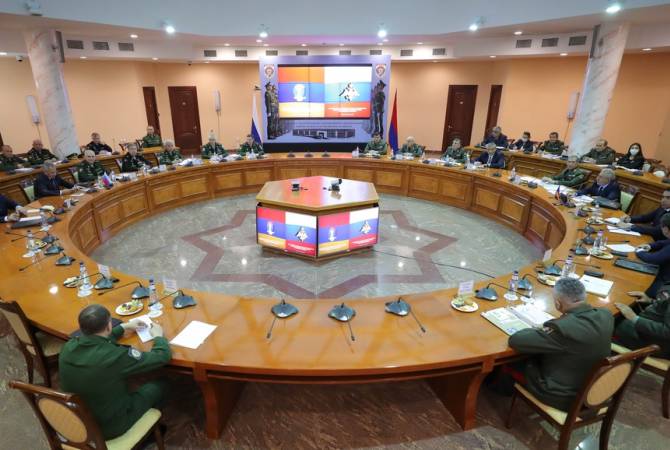 
YEREVAN, NOVEMBER 21, ARMENPRESS. The extended format meeting of the delegations of Armenia’s Defense Minister Vagharshak Harutyunyan and Defense Minister of Russia Sergei Shoigu was held at the Armenian defense ministry on November 21, the ministry told Armenpress.

A broad range of issues relating to the current situation around Nagorno Karabakh, the future actions and the Armenian-Russian military cooperation were discussed during the meeting.

The sides highly valued Russia’s role and efforts aimed at stabilizing the military-political situation in the region, as well as the process and effectiveness of the Russian peacekeeping mission in Artsakh in accordance with the November 10 statement signed by Armenia, Azerbaijan and Russia. The Russian defense minister reported on the actions done so for in this direction and the future plans.

The Armenian and Russian defense ministers stressed the importance of work on finding and exchanging killed servicemen, prisoners of war and missing persons, as well as the work of the inter-agency humanitarian response center created in the territory of Nagorno Karabakh aimed at organizing the works of the return of refugees, restoration of civilian infrastructure, etc.

At the end of the meeting the Armenian and Russian defense ministers signed a package of documents regulating the framework of the actions of the Russian peacekeeping troops in the Nagorno Karabakh conflict zone.