Offices of 1st, 2nd Presidents of Armenia comment on their readiness to go to Moscow | ARMENPRESS Armenian News Agency

Offices of 1st, 2nd Presidents of Armenia comment on their readiness to go to Moscow 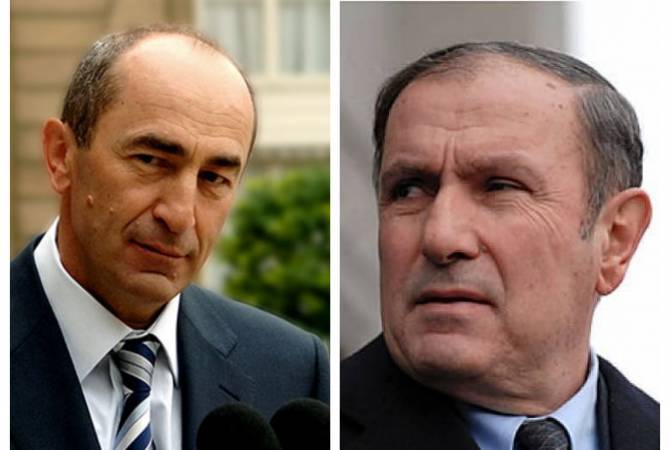 
YEREVAN, OCTOBER 30, ARMENPRESS. The Offices of the 1st and 2nd Presidents of Armenia, Levon Ter-Petrosyan and Robert Kocharyan have commented on the information of their willingness to leave for Moscow.

‘’Now our country is in complicated war situation and for avoiding misunderstanding and speculations, we will give detailed clarification over this issue only after the end of the crisis’'.

The statement of the Office of the 2nd President of Armenia says that 2nd and 3rd Presidents of Nagorno Karabakh Republic offered Robert Kocharyan to leave for Moscow, but he is unable to go because of being infected with coronavirus.

''The President accepted the reasonability of the offer, but his exit from the country was closed for the well-known reason. Following the conversation between the Prime Minster and Arkadi Ghukasyan and Bako Sahakyan (former NKR Presidents – edit.), the court allowed President Kocharyan to leave the country/with the limitation of exit permit until November 7/ and returned his passport.

Robert Kocharyan was planning to leave for Moscow in the nearest days and passed COVID-19 test for that, which is mandatory for the entry to the Russian Federation.

The result of the test was positive, which was very unexpected, since he had and now has no symptoms.

Now President Kocharyan is in self-isolation, but makes all efforts to contribute to the cessation of hostilities in Artsakh'', reads the statement of the Office of the former President of Armenia Robert Kocharyan.

Earlier today, Mane Gevorgyan, the spokesperson of the Prime Minister, wrote on her Facebook page that first and second Presidents of Armenia Levon Ter-Petrosyan and Robert Kocharyan want to leave for Moscow to discuss with the Russian elites the situation over Nagorno Karabakh and offer concrete solutions to the Armenian Government based on the discussions.