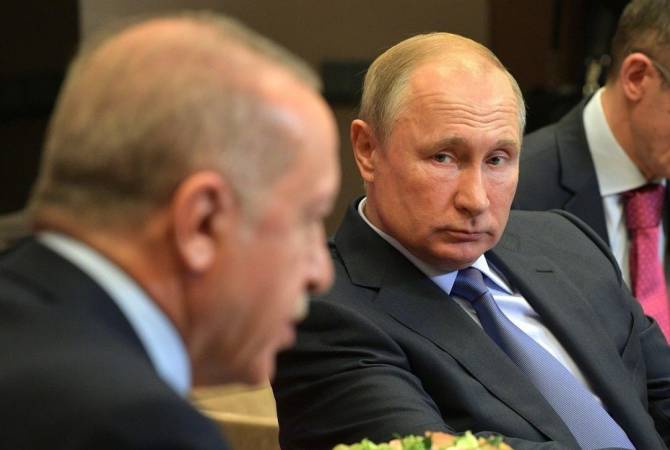 
YEREVAN, OCTOBER 28, ARMENPRESS. Russian President Vladimir Putin and his Turkish counterpart Recep Tayyip Erdogan have not discussed the issue of Turkey’s participation in the negotiations for the settlement of the Nagorno Karabakh conflict during their phone talk held on October 27, Russian presidential spokesman Dmitry Peskov said, reports TASS.

Peskov added that only the conflicting parties can give a consent to the participation of this or that country to the negotiations.

The Kremlin spokesperson stated that despite the agreement reached earlier the battles in Nagorno Karabakh continue, adding that this is concerning. He said stable ceasefire doesn’t exist.

By the initiative of the Turkish side Russian President Vladimir Putin held a telephone conversation with Turkish president Recep Tayyip Erdogan, during which they discussed a number of issues, including the Nagorno Karabakh conflict.

“The developments in Nagorno Karabakh conflict zone were discussed. The Russian side expressed deep concern over the ongoing military operations, as well as over the more large-scale involvement of terrorists from the Middle East’’, reads the Kremlin statement. Vladimir Putin informed about his contacts with the leadership of Azerbaijan and Armenia and the measures aimed at achieving ceasefire as soon as possible and de-escalation of the crisis.

The sides agreed to continue coordinating the activities between the foreign and defense ministries, as well as special services of the countries.