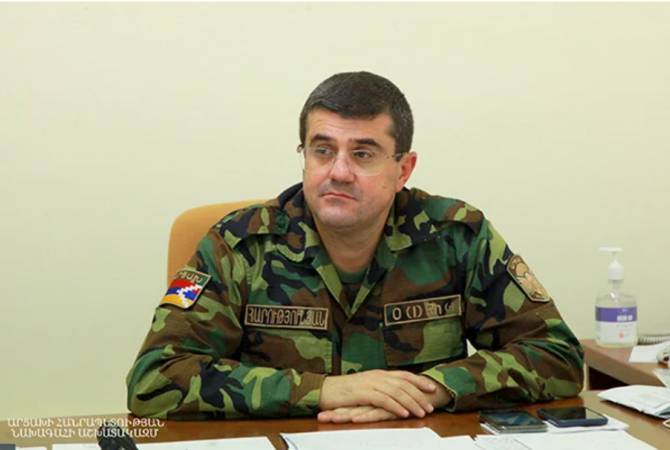 
YEREVAN, OCTOBER 26, ARMENPRESS. President of Artsakh Arayik Harutyunyan records that against the efforts of the OSCE Minsk Group Co-chair countries aimed at establishing humanitarian ceasefire in the region, the military-political leadership of Azerbaijan continues to ignore and violate all the agreements for that, ARMENPRESS reports Arayik Harutyunyan wrote on his Facebook page.

''Like the previous times, the agreement reached with the mediation of the USA and participation of the OSCE Minsk Group Co-chairs, that reaffirmed the commitment of the sides to reach and observe a humanitarian ceasefire assumed on October 10 in Moscow and October 17 in Paris under the initiative of the Russian and French Presidents, today was again grossly violated by official Baku. Particularly after the midday, Azerbaijan resumed offensive operations with the use of artillery and rockets along the entire frontline.

All these confirm that Azerbaijan, enjoying the unconditional sponsorship of the Turkish authorities and mercenary-terrorists, has no plans to resume peaceful dialogue and overtly show that they will continue their military efforts for the final eviction of Armenians from Artsakh. Therefore, our national task is to struggle for the sake of the safe and dignified existence of the Armenians of Artsakh in their own Motherland. The security and rights of our people are not a subject for compromise'', Harutyunyan said.