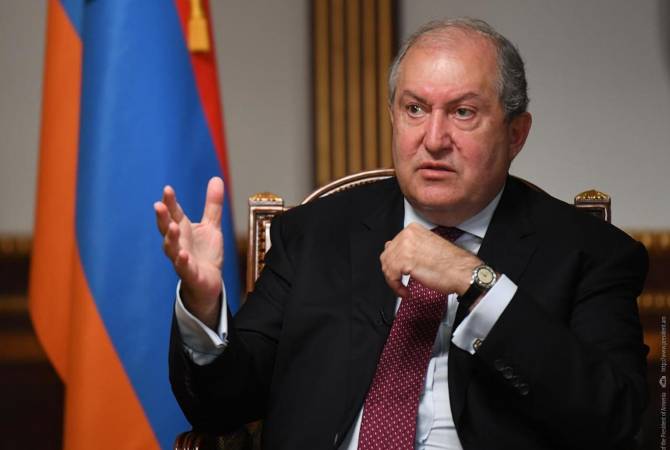 Below is the re-print provided by Sarkissian’s Office:

“On September 30, I drafted a special letter to several world leaders to describe to them the situation in and around Nagorno-Karabakh, a contested region of the Caucasus inhabited predominately by ethnic Armenians. It has been attacked aggressively by Azerbaijan, with the full support of Turkey. I could hardly anticipate the scope of the aggression and the lack of humanity in the behaviour of their forces. Then and even now, the reality on the ground that my fellow Armenians are experiencing is more than alarming, and risks igniting further escalation and insecurity in the region and even beyond.

Months and even years before the military aggression by Azerbaijan on September 27, the Azerbaijani leadership was using very harsh, militaristic rhetoric and overtly voicing, at the highest levels of government, its intentions to resolve the conflict through a fully fledged war. Nagorno-Karabakh and Armenia have been facing similar attempts for more than 25 years since a ceasefire was established after the first Karabakh war in 1994. Ever since then, the rhetoric and the destructive behaviour of Azerbaijan has never faded.

Nagorno-Karabakh – or Artsakh, as we call it in Armenia – has always been populated overwhelmingly by Armenians. It has never been a voluntary part of independent Azerbaijan. In 1921, Nagorno-Karabakh was given as a gift by Russia under Josef Stalin to Soviet Azerbaijan, which was not an independent state, but a part of the Soviet Union.

Following decades of continued discrimination, in 1987 and 1988 the Armenians of Nagorno-Karabakh began to raise their voices to re-join with Armenia. They conducted peaceful demonstrations and signed petitions. At the same time, ethnically motivated persecutions against Armenians in Soviet Azerbaijan mounted. There were pogroms and ethnic cleansing campaigns in a number of Azerbaijani cities.

During the collapse of the Soviet Union, the Armenians of Nagorno-Karabakh declared their independence earlier than Azerbaijan. In fact, Azerbaijan declared its own independence from the Soviet Union in a separate process, without Nagorno-Karabakh. Despite this and other facts that, in Armenia’s view, make Azerbaijan’s claims baseless in the context of the international law, the government in Baku seeks has, for about 30 years, sought to oppress with military means the right of the Armenians of Nagorno-Karabakh (or the Republic of Artsakh) to live in their homeland. It pursues a policy of forcibly capturing lands, cleansing them of their native inhabitants and heritage and ignoring the basic, fundamental rights.

After 30 years of rejecting any attempts at a peaceful solution, Azerbaijan, supported militarily and politically by Turkey, is once again attacking Armenia’s cherished homeland. Azerbaijan’s position is, in a sense, a continuation of the policies that Armenians have faced ever since the Ottoman Empire tried to perpetrate the genocide of Armenians almost 105 years ago. At that time, about 1.5 million ethnic Armenians perished, or were exiled and persecuted.

The Azerbaijani side today includes not only Turkish generals, officers and military experts, but also Turkish F-16 fighter jets and the infamous “Bayraktar” drones. Every day, these death machines and are involved in bombing Nagorno-Karabakh and even Armenia. Lethal and even prohibited weapons, such as cluster munition, have been deployed for more than three weeks against a huge number of Armenian civilians and civil infrastructure. The latter includes hospitals, houses and even kindergartens.
If you add to this the involvement of Syrian mercenaries, jihadists and radical fanatics who are now on Armenian soil killing my people, the full picture is clear. Mercenaries from international terrorist organisations fighting in the Middle East — in particular, Jabhat Al Nusra, Firqat Hamza and the Sultan Murad Division – are actively entering the fray. Armenia and Nagorno-Karabakh are dealing with international terrorism.

Hence, we in Armenia remain very concerned and alert for those developments on the ground. We are also concerned by the hesitant stance of the international community, which needs to react immediately. It needs to apply pressure to Turkey to withdraw from our region with its weapons, mercenaries and cynicism. It needs to apply pressure to Azerbaijan to respect two ceasefires agreed on October 10 and 17. The war by Turkey and Azerbaijan against my nation risks creating another Syria in the Caucasus, with the potential to fuel a greater fire in the entire region and beyond.

Turkey does not hesitate to export Islamist militants and other terrorists into Azerbaijan. But, as usual, it needs an excuse for doing so. One of its excuses has been that Azerbaijanis are its ethnic kin. The reality is that that line of thinking simply doesn’t work in the new world, because by that logic Turkey’s ethnic kinship extends all the way into Central Asia, Mongolia, northern China and elsewhere. Is Ankara ready to interfere with any problem that its ethnic brothers may face there?

Perhaps the answer is yes – in which case, it is no wonder that modern Turkey has problematic relations virtually 360 degrees in every direction. It has had problems with Egypt. It is now involved in Libya. It speaks about the territorial integrity of Azerbaijan, but in the meantime has crossed over its border with Iraq. It violates the territorial integrity of Syria. It is trying to be very present in Lebanon and in parts of the Gulf. It also has big issues in the Eastern Mediterranean. And now, it is in the Caucasus. All of this is unacceptable.

Leaders of civilised nations, regardless of their religious or ethnic identities, must act unequivocally to stop aggressors and establish long-lasting peace. We need peace, and it can only be reached through negotiation and talks. But this is what the Azerbaijani side rejects each and every time, for reasons that are horrific to the rest of us. They claim they have a legitimate right to use force – brutal, military force – against the Armenians living in Nagorno-Karabakh.

We need to understand that there is no military solution to this and, I would say, to any conflict. Armenians have always believed that a solution has to be reached through peaceful negotiations and in a way that does not make things worse. This is why we have refrained from officially recognising the Republic of Artsakh, so as to allow the negotiations to take place and reach a peaceful solution. But Turkey and Azerbaijan seem to have a different understanding of what a solution is, and they push only a militaristic, aggressive and, in my view, genocidal agenda.

My appeal to Muslim and Arab leaders aims at asking them to use their influence and high prestige in the international arena to immediately stop the bloodshed and human suffering.

Together, we can stop this aggression, because we are proponents of peace, who reject war, violence and terrorism."