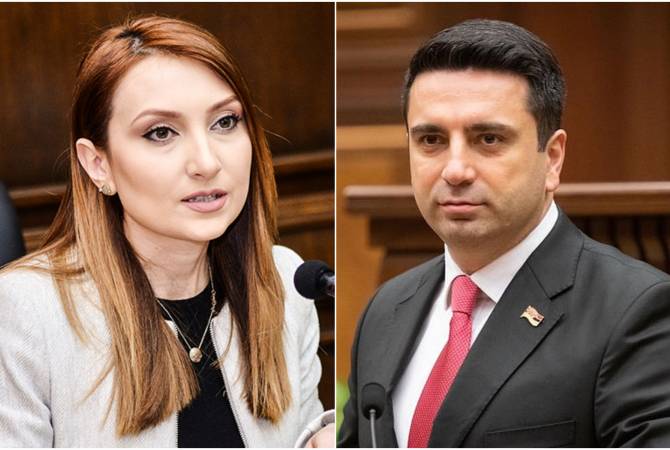 
YEREVAN, OCTOBER 26, ARMENPRESS. Parliament Majority Leader of Armenia Lilit Makunts, who is also the Chair of the Armenia-United States parliamentary friendship group, says she believes that the October 25 remarks by US President Donald Trump in New Hampshire on Armenians and Artsakh is a hint for a potential recognition of Artsakh by the United States.

“Donald Trump today hinted in New Hampshire that the United States could recognize the independence of Artsakh,” the Armenian lawmakers said and quoted Trump’s speech.

“Armenia, you know Armenia? We’re working on that. You know we’re working. We did it with Kosovo and Serbia. Do you believe I got three nominations for the Nobel Peace Prize? Can you believe it,” Trump said in a campaigning event in New Hampshire when one of the speakers said “Armenia for Trump”.

“So now we have Armenia. Look at the Armenia. They are incredible people. They’re fighting like hell, right? They’re fighting like hell. And you know what? We’re going to get something done because, thank you. And I love you, too. You know the Armenians have had a tough go. In fact, I was in yesterday, Ohio, actually. I was in Ohio because I went to various stops. But in Ohio we had a tremendous group of Armenians with the flag and the whole thing, the spirit. And the problems that they have and the death and the fighting and everything else, we’ll get that straightened out. I call that an easy one. Okay? We’ll get that. Go back and tell your people. Go back and tell your people. All right? We’ll get that straightened out. Armenia. Why not? It’s easy. If you know what you’re doing, it’s like that. If you know what you’re doing, it’s easy. But we will,” he continued.