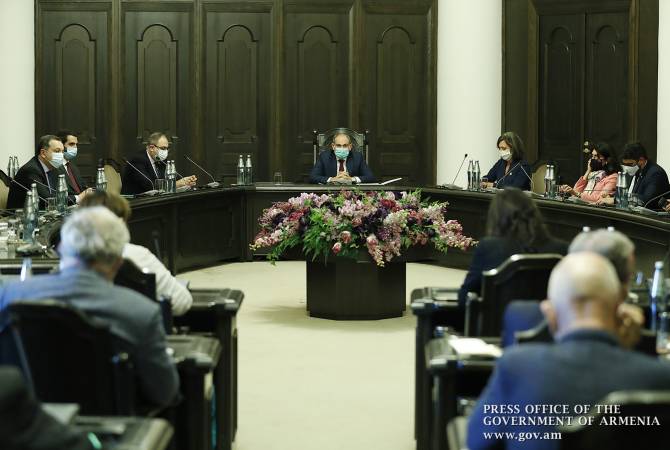 As ARMENPRESS was informed from the Office of the Prime Minister, Nikol Pashinyan thanked them for visiting Armenia and supporting the Armenian people during this difficult period. ''Of course, we feel your presence and support not only when you are physically with us, but during your activities, the activities of our friendly France. I also want to say words of appreciation for the activities of French President Emmanuel Macron, who was the first leader of a country to speak the justice about this situation, clearly recording that Syrian mercenaries are involved in the war against Artsakh and that Turkey is the key initiator of this war'', Nikol Pashinyan said, adding that he keeps in constant touch with the French President.

Referring to the situation in Nagorno Karabakh, Nikok Pashinyan noted that the situation on the frontline remains calm. ''In fact, Azerbaijan denies the international efforts for the ceasefire, giving a variety of reasons. Generally speaking, the situation is the following – the compromise that is acceptable for Armenia immediately becomes unacceptable for Azerbaijan. This is not something new. We witnessed this situation for quite a long time of the negotiations. I can bring the example of 2011 to make clear that this is not a new handwriting.

In 2011, during the period of the well-known Kazan process, the Republic of Armenia had agreed to an option of some mutual concessions, and there was an agreed text for the settlement, but Azerbaijan denied to sign it at the last moment, making its position tougher'', Pashinyan said, emphasizing that this is a very important nuance.

According to the PM, the entire international community expects that Nagorno Karabakh conflict should be solved based on mutual concessions. ''Mutual concession means that the sides should demonstrate some flexibility over their initial positions, but the problem is that whenever Armenia agrees to some concession, that situation becomes unacceptable for Azerbaijan and it demands more. It's this behavior that has led to war, and during the war the same happens, starting from the Moscow statement. Another agreement was reached under the mediation of President Macron, but Azerbaijan continuously and consistently violates the ceasefire agreements'', the PM said, adding that here Turkey has a decisive role, because every time when there are discussions about ceasefire, we hear announcements at the level of foreign minister or president of Turkey, that Azerbaijan should not stop military operations.

''This is a very important nuance, because, in fact, we can say that Azerbaijani president has little control of the military operations, because terrorists and mercenaries involved there are controlled by Turkish military, who are in Azerbaijan'', Nikol Pashinyan said.

The PM added that Armenia's position on NK conflict settlement remains the same. ''We think the issue has no military solution, and we should find a solution based on mutual concessions. Like in the past, Armenia is ready for mutual concessions now, but here the main obstacle for progress is that any situation that can be acceptable for Armenia in the logic of mutual concessions, it immediately becomes unacceptable for Azerbaijan and they every time, of course with Turkish support, continue to demand more. And in this situation it's unclear what's the limit of their appetite and demands. Therefore, the self-defense of Nagorno Karabakh and its people remains the priority issue, in order to make a real diplomatic solution based on mutual concessions realistic'', Nikol Pashinyan said.

Afterwards, PM Pashinyan answered the questions of the French parliamentarians, which were about the discussions with the Presidents of the OSCE Minsk Group Co-chairs, Turkey's un-constructive policy and regional aspirations, the indirect involvement of Israel in Karabakh-Azerbaijan war and the expectations of the Armenian people from the international community.

PM Pashinyan highlighted that the status of Artsakh and implementation of the right to self-determination remain priority for the Armenian people.

The French parliamentarians thanked for the discussion and informed that they plan to visit Artsakh to get acquainted with the situation on the ground.