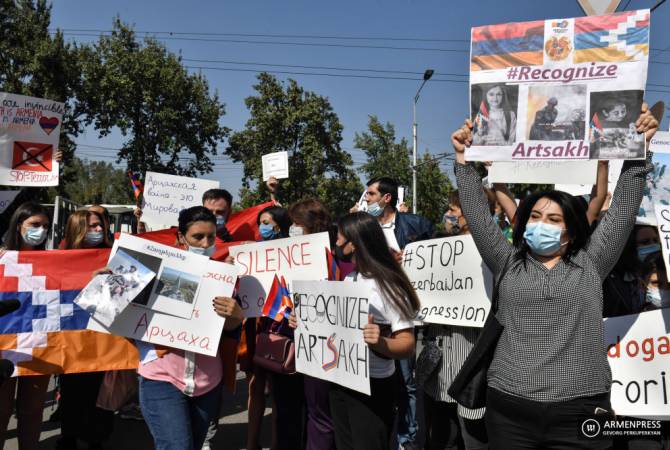 
YEREVAN, OCTOBER 22, ARMENPRESS. Women from Artsakh, who have temporarily settled in Armenia due to the ongoing Azerbaijani aggression, are holding protest with their children outside the US Embassy in Yerevan, demanding a meeting with US Ambassador Lynne Tracy.

The Artsakh women urge the international community to give an adequate response to the Turkish-Azerbaijani-terrorist aggression against Artsakh.

“We urge to impose sanctions on Turkey and Azerbaijan”, “Stop terrorism”, “Why NATO member is killing us?”, the Artsakh women said holding the respective posters.

One of the protest participants Irina Safaryan said they gathered outside the Embassy to demand justice.

“We demand to stop the terrorism which is taking place today in Artsakh. We came here to demand the US, as a main NATO member, to apply sanctions on Turkey and stop the Turkish interference to the Karabakh-Azerbaijani conflict, as well as interfere into the peaceful settlement of this conflict as an OSCE Minsk Group Co-Chair, and eventually establish peace in our country. We came here and demand the US Ambassador to come and listen to our voice”, she said.

After this call, three Artsakh women were invited to the Embassy to hand over their letter where they wrote all their demands.