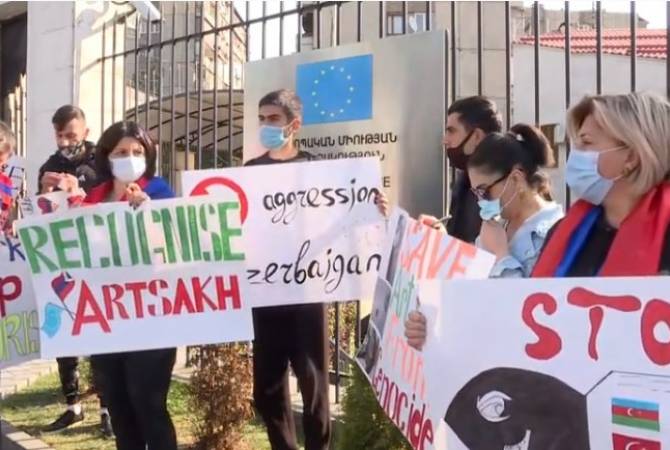 
YEREVAN, OCTOBER 20, ARMENPRESS. Three citizens of Armenia are meeting with EU Ambassador to Armenia Andrea Wiktorin, urging to give concrete assessments to the ongoing Azerbaijani aggression against Armenia and Artsakh.

“The calls for peace, humanity in our region have been mainly voiced thanks to these international structures. Today the EU also needs to carry out a mission of forming a security council in our region. And we again face their silence”, activist Armine Melkonyan said before the meeting.

The citizens are going to present videos, photos proving the Azerbaijani atrocities to the EU Ambassador.

Meanwhile, a group of other Armenian citizens gathered outside the EU Delegation, hold posters calling on to condemn the Turkey-backed Azerbaijani aggression.

Similar protests were held on October 19 outside the UN Office and the US Embassy in Yerevan, again calling on to condemn the Turkish-Azerbaijani aggression.