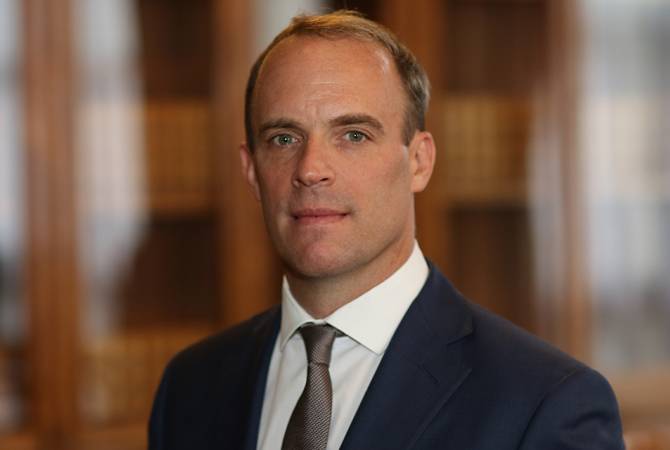 
YEREVAN, OCTOBER 19, ARMENPRESS. 104 Armenian alumni of educational programs funded by the UK addressed a letter to the Secretary of State for Foreign, Commonwealth and Development Affairsof the UK Dominic Raab over the situation in Artsakh and Armenia resulted by Azerbaijani-Turkish aggression.

‘’Dear Mr. Foreign Secretary, We address you as members of the global community of professionals selected by the UK Government scholarships and fellowships for our unconditional commitment and ability to bring positive change to the world.

We feel obliged to inform you about the ongoing events in our homeland — Armenia and Artsakh (Nagorno-Karabakh). On September 27, 2020, Azerbaijan launched a large-scale airborne, missile and land attack along the entire Line of Contact with Nagorno-Karabakh in a blatant disregard of the pre-agreed principle of non-use of force or threat of use of force in the context of the resolution of Nagorno-Karabakh conflict.

The aggression by Azerbaijan has been politically encouraged and militarily supported by Turkey, as numerous sources of evidence have proved full Turkish involvement in the attack on Nagorno- Karabakh. As confirmed by Presidents of France and Russia and alerted by the Secretary of State of the USA, the three OSCE Minsk Group co-chair countries assigned to mediate a peaceful settlement of the conflict, Turkey also deploys mercenaries and terrorist groups from Syria to fight for Azerbaijan against Armenians of Artsakh.

We would like to highlight, that this threatens not only regional security for years to come, but helps to institutionalize terrorism, creating terrorist clusters in this part of the world and threatening global security far beyond Armenia and Nagorno-Karabakh. As a result of this aggression, for three weeks now, peaceful settlements in the capital of Artsakh — Stepanakert, as well as in Shushi, Hadrut, Martakert and Martuni towns have been carpet- bombed, indiscriminately targeting civilian population and infrastructure, including a 19th century cathedral, hospitals, kindergartens and schools. As reported by Amnesty International, cluster munitions, banned under International Humanitarian Law, have been used by Azerbaijan to attack civilians of Artsakh. This has forced thousands of civilians to leave their homes, while the rest have to hide in underground shelters. Around 35 casualties have already been reported, while more than 700 soldiers have fallen from the Armenian side. Heinous war crimes have been committed, as civilians including a man with disability and his mother were massacred in their home.

Furthermore, a video footage, circulated in the social media and verified by independent analysts, showed two Armenian prisoners of war, one of them an elderly man, captured by Azerbaijani military and executed on camera.

It has to be also mentioned that this large-scale attack comes after the military aggression towards the northeast border of the Republic of Armenia in July 2020, during which the Azerbaijani authorities threatened to launch missile strikes at the Metsamor Nuclear Power Plant near Yerevan, Armenia.

The dictatorial leadership of Azerbaijan not once has demonstrated a wanton disregard of all norms of international law and not once has proved that it has never acted in good will during the negotiation process, constantly rejecting the OSCE Personal Representative of the Chairman-in- Office monitoring requests and adopting a maximalist approach that leaves no room for any compromise.

Taking into account the heavily grounded evidence of Azerbaijani aggression, as well as to avert an imminent humanitarian crisis in Artsakh and in the larger region, we expect the international community to take action beyond addressing both sides with calls to cease the fire. It has been especially disappointing to see that the British Ambassador to Azerbaijan has adopted a biased approach expressing his opinion about the consequences of the war unleashed by Azerbaijan and ignoring the massive assault on civilians of Nagorno-Karabakh.

We strongly believe that the responsibility to protect fundamental human rights must not be abandoned based on any political or economic interest: people everywhere, in states recognized or not, have the right to life and dignity. We also believe that this stands at the core of the ideology the British society and state are built upon.

Thus, we call on you, Mr. Foreign Secretary, to do everything in your power: 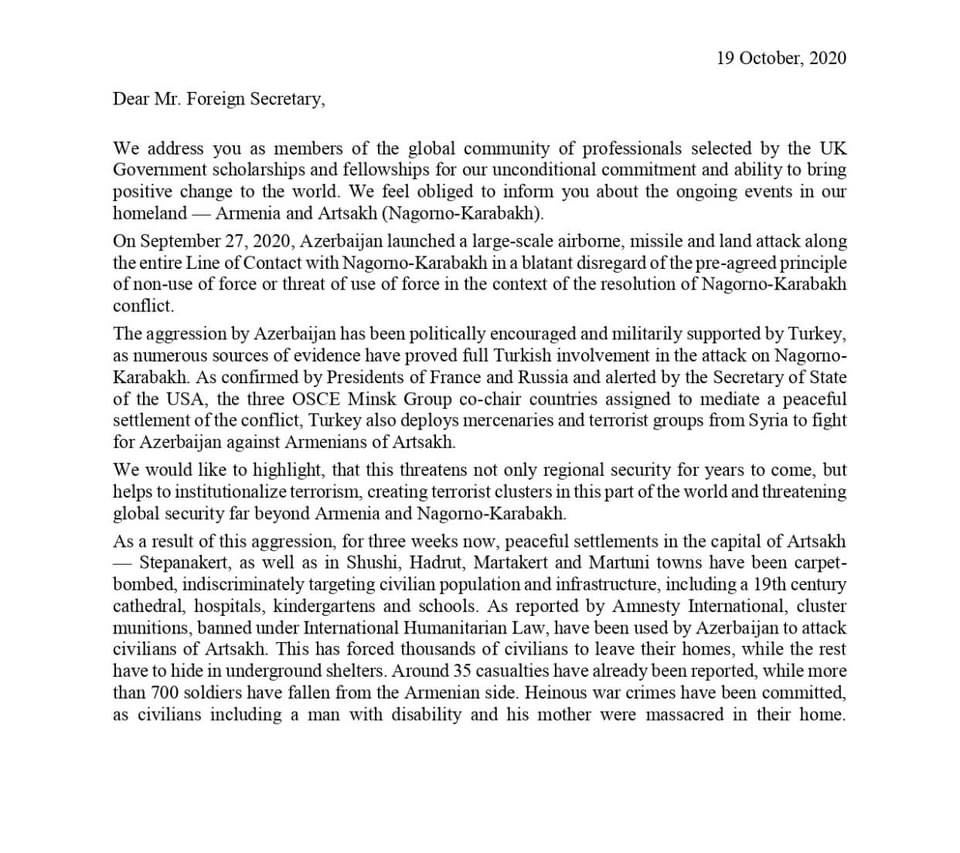 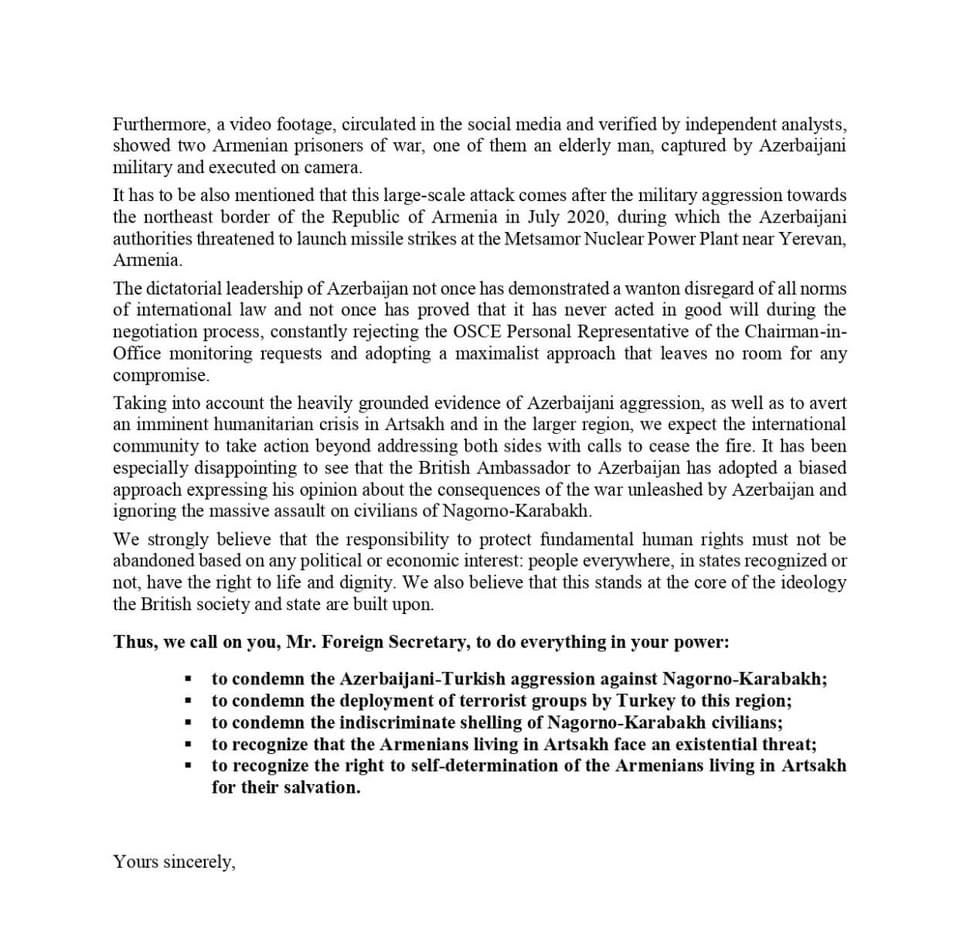