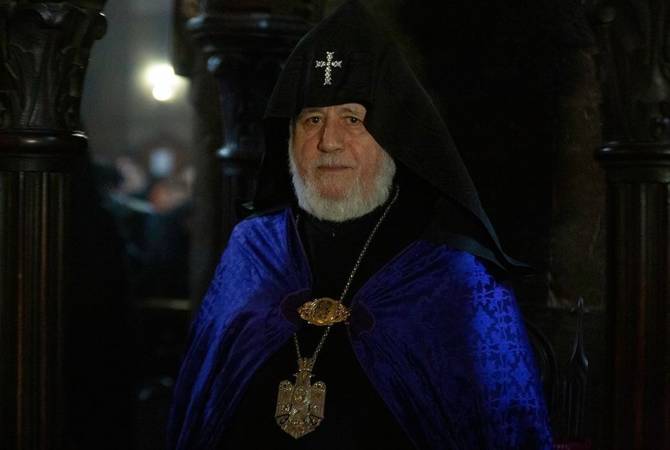 - Your Holiness, the Armenian Church, Armenian people and peoples confessing Islam have lived side by side for centuries having good relations. Stimulating passions, many attempt to present Nagorno Karabakah conflict as a ‘’war of religions’’. How would you comment on this?

- As a result of historical consequences, starting from the Middle Ages and particularly following the Armenian Genocide by the Ottoman Turkey the Armenian people spread all over the world. Many Muslim countries extended a brotherly hand and provided shelters to the Armenian people who survived the genocide, where up till now Armenian communities exists. The Holy Apostolic Armenian Church has its Dioceses in nearly a dozen of Muslim countries, where our compatriots live as exemplary citizens of those countries, bringing their contribution to the development and prosperity of those countries and enjoying the friendly attitude of the leadership. The Armenian Church continues the dialogue at various inter-religious platforms for the sake of peaceful and welfare life of the humanity. The visits of the leaders of the Islamic world to the Mother See of Holy Etchmiadzin and reciprocal visits are a proof of this. Starting from the 1st days of the Artsakh war, by the mediation of the Patriarchs of the Russian Church, a platform of trilateral meetings was established with the participation of the religious leader of the Muslims in Caucasus and the Catholicos of All Armenians. During those meetings it has been emphasized several times that Karabakh conflict has no religious roots, also the necessity of peaceful co-existence  and mutual understanding of Christians and Muslims in our region was emphasized.

During these days, when many civilians fall victim of the Azerbaijani aggression, settlements are bombed and the brave children of our people protect their right to free and independent life risking their own lives, we often witness attempts even at the level of the Azerbaijani president to give a religious nature to Karabakh conflict, which is nothing else but provocation, which unfortunately can lead to horrifying consequences.

- In his official speech addressed to the Azerbaijani people on October 4, Ilham Aliyev noted that Azerbaijanis have lived in Karabakh for centuries and today the cultural, historical and religious monuments created by Azerbaijanis have been destroyed.

- This is another announcement of the Azerbaijani president that does not correspond to the reality. Muslim monuments in Armenia and Artsakh have always been under state protection. A brillian example of my words is the Mausoleum of Kara Koyunlu Emir’s father, Emir Saad in Argavand village of Armenia, or the Blue Mosque in Yerevan. During the past years the authorities of Artsakh provided necessary funding for the maintenance and restoration of the Mosques and other Muslim monuments in Sushi, Aghdam and other regions. While in Azerbaijan, and particularly in Nakhichevan Azerbaijani servicemen destroyed valuable Christian monuments, tens of thousands of centuries-old cross-stones and tombs. The world learned about this from various footages. The Armenian people have always respected the religious-cultural values of others, in this case Islamic values. Peoples living in other countries, with whom our compatriots live side by side, can testify this.