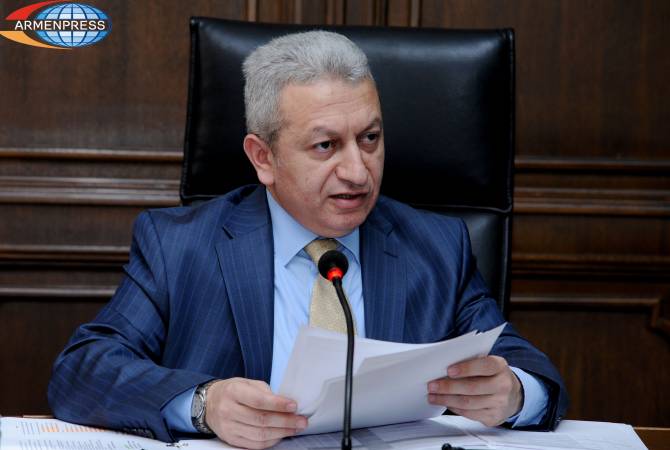 
YEREVAN, OCTOBER 5, ARMENPRESS. The Armenian parliamentary standing committee on financial-credit and budgetary affairs approved the bill submitted by the government on making changes and amendments to the Law on the 2020 State Budget, which proposes to increase the current expenditures by 40 billion drams due to the ongoing military operations, and the decline in economic indicators will comprise 6.8%.

“The forecasts by the yearend have been revised. Obviously, the martial law will have its impact on the economic developments”, the minister.

6.8% decline in economic indicators is expected in 2020. The annual GDP will decline, comprising 6 trillion 170 billion AMD. `

The state budget deficit will comprise nearly 459 billion drams (7.4% of the GDP). “It’s supposed such deficit will be served at the expense of attracting debt, as there is no other alternative. On other hand, it is supposed that the attraction of this debt will also lead to major change in the debt-GDP ratio”, he said.

As for 2020, it is estimated that the Government’s debt-GDP figure will reach nearly 67%, passing the 60% threshold.

Azerbaijan launched an attack on Artsakh (Nagorno Karabakh) on September 27 with the support of Turkey, targeting also the civilian settlements, including the capital Stepanakert. Civilians were killed in Artsakh as a result of the Azerbaijani offensive.

Heavy battles are taking place between the Azerbaijani and Artsakh sides, with both suffering huge losses both in the manpower and the military equipment. But the losses of the Azerbaijani side are much more than that of the Artsakh side. The Azerbaijani armed forces have also targeted Armenia’s military and civilian infrastructures. There is evidence that Turkey is directly engaged in Azerbaijan’s offensive, in particular it transported mercenaries from Syria for using them against Artsakh.