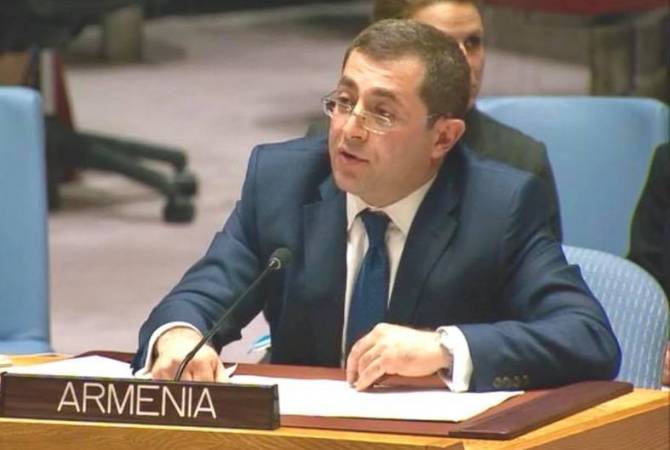 
YEREVAN, OCTOBER 3, ARMENPRESS. Permanent Representative of Armenia to the UN Mher Margaryan gave an interview to Arab News Daily, noting that the aggression of Azerbaijan and Turkey against Armenia and Artsakh is not just an aggression against Armenians, but against the basic values of the humanity and what the United Nations stands for.

ARMENPRES presents the non official translation of the interview.

Question: The clashes over the region of Nagorno-Karabakh have been the fiercest since 1990s.Fears are growing over a regional war that might draw in Russia and Turkey. We are going to talk in depth about what’s going on there with Ambassador Mher Margaryan, Armenia’s Permanent Representative to the United Nations in New York. Thank you so much for joining us,Ambassador.

Over the past few days, France has been sparring with Turkey over the clashes. PresidentMacron has sent a very clear message to Turkey that these war-like messages are not going to be accepted by France. At the same time, we see Russia point to the foreign interference. Reuters has reported that Turkey sending foreign fighters to fight in Nagorno-Karabakh. How concerned are you about foreign interference and outside forces slowly taking part in what’s happening right now?

Answer: Thank you for this opportunity. As you have already mentioned, there are many credible reports about the involvement of foreign terrorist fighters and mercenaries, and there have been calls from the international community, also, from the Minsk Group Co-chairs. The foreign mercenaries, who, actually, are being recruited and transported with the support of Turkey (and we have to name the names here), have been very destructive elements, and their activities and transportation to the Nagorno-Karabakh conflict zone needs to be stopped.

A: The belligerent actions of Azerbaijan have been preceded by many years of dangerous rhetoric of hate speech and Armenophobia, openly and consistently promulgated by Azerbaijan at the highest political level. The leadership of Azerbaijan has been promoting hate crimes and glorifying hate criminals. At the same time, they have been spending billions of dollars to acquire deadly offensive weaponry and openly threatening the people of Armenia and Nagorno-Karabakh with promises to use force. It comes as no surprise for those who have been following it that the statement made by the president of Azerbaijan at the General Debate of the 75th session of the General Assembly last week was not only a textbook manifestation of hate speech but also, as we have come to realize, as a declaration of war against the people of Nagorno-Karabakh, with a clear genocidal intent. The offensive also comes amidst a global crisis caused by the COVID-19 pandemic, when the international community is focused on fighting the disease. Obviously, one may think that the leadership of Azerbaijan has decided to take advantage of the global vulnerabilities caused by the pandemic, also, in light of the internal instabilities that they are experiencing. This is not just an attack against the Armenians. This is an attack against the basic norms of humanity, an attack against what the United Nations stands for.

Q։ Speaking of the United Nations. The UN Secretary-General Guterres has called for cessation of all hostilities and for all the parties to come together to a negotiating table. Of course, Azerbaijan and Armenia refused to come back to the negotiations. What can you tell us about that? What will it take to sit down and negotiate and is that a possibility, to start with?

A։ Armenia has never refused peaceful negotiations, we have been on record of encouraging, also, the participation of the representatives of the elected authorities of Nagorno-Karabakh to sit down with Azerbaijan and to engage in peaceful talks. The UN Secretary-General has, indeed called for immediate return to negotiations and to stop fighting and deescalate tensions. It doesn’t seem to be the intention of Azerbaijan to follow that call, though. I would also like to recall that the UN Secretary-General has made an appeal for an immediate global ceasefire, at the outbreak of the COVID-19 pandemic. Back in March, he was calling for pulling back the hostilities and silencing guns, stopping artillery, ending air strikes. Armenia was one of the first countries to support this appeal, and more than 170 countries supported it, too. Azerbaijan not only refused to support the Secretary-General’s appeal but also resorted to large-scale military aggression.

Q։ What is the role of the Mink Group today, in the circumstances we are living in? Is it still capable of containing the dispute effort to contain the dispute? Do you expect the members - France, US, Russia - to overcome their differences over other conflicts and maybe rally behind Armenia?

A: The OSCE Minsk Group Co-Chairmanship is the only internationally mandated format to mediate the Nagorno-Karabakh conflict. The Co-chair countries have expressed on several occasions their unified position on the principles of the resolution of the conflict and they have made it clear that the hostilities need to stop. There have also been statements by the Co-chair countries, calling for external parties and foreign fighters to stay away from the conflict. I believe it is clear who the calls are addressed to.

Q։ What do you think Turkey really wants out of all of this? What is your message to your international community on how Yerevan expects the world to deal with Turkey right now?

A։ We see the Turkish involvement as another attempt of exporting instability to our region. We have been observing increasing engagement of the Turkish military in the conflict zone. This is something that needs to be condemned by the international community. The destabilizing record of Turkey, be it in the Eastern Mediterranean, in the Middle East, is well known.

Q։ How much of this is about the strategic importance of the region, being a corridor to the oil pipelines that distribute oil to markets all over the world? How much of it has to do with this important fact?

A։ This makes the situation very dangerous and, if Azerbaijan and Turkey are not contained, it can lead to an escalation, the consequences of which can have devastating impact on the entire region and beyond. Azerbaijan and Turkey must come to their senses and head to the calls of the international community, including the recent calls of the UN Secretary General, also, bearing in mind the outcome of the UN Security Council’s meeting yesterday, and need to commit to peace, in good faith.

Q։ How do the Armenians feel about the conflict in that region that has consumed decades and caused many lives and displacement? What is the importance of this region in the consciousness of the Armenians?

A։ The people of Nagorno-Karabakh exercised their right to self-determination in 1991. They have every right to live in their ancestral historical land, without fears or foreign coercion. The right to self-determination, which is enshrined in the UN Charter, is at the core of the issue. They have exercised this right by way of a referendum, back in December 1991, in accordance with the applicable laws of the time. Armenia, as a guarantor of the security of the people of Nagorno-Karbakh, will take every measure to defend their inalienable rights. Armenians all over the world are strongly united on this matter, because we, as Armenians, we cannot allow another genocide to be perpetrated against the Armenian population in course of the Azerbaijani military aggression encouraged and supported by Turkey.

Q։ What about the United States? The United States has not prioritized the Nagorno-Karabakh since 2001, I believe. Do you expect a more active American role?

A: The United States is one of the Co-chairs of the Minks Group. We very much appreciate their role and engagement, along with that of Russia and France. The United States has been vocal on the recent escalation, calling for immediate cessation of hostilities and discouraging external actors from getting involved in this conflict. We would very much wish to see a stronger engagement, together with the other two Co-chairs of the Minsk Group.

Q։ Do you see the region, being what it is right now, with all the conflicts in the Eastern Mediterranean, the conflict with Iran - your Prime Minister talked today to the President of Iran - do you think all of these may be an incentive for the United States to move Nagorno-Karabakh up on its priorities?

A։ We hope it is on the list of priorities, and we hope the Co-chair countries will continue to have a unified, cohesive position on the principles of the resolution of the conflict.

A։ It is hard to say who would benefit from this conflict but apparently it is well known who is instigating this conflict and who has started it, not only to the expert community and the mediators but also to the larger international community. We have been observing years of accumulation of military build-ups and offensive weaponry by Azerbaijan, observing the escalation of hate speech and instigation of hatred against the Armenians, not only those who live in Nagorno-Karabakh and Armenia but Armenians in general, all over the world. Those are very well-documented facts, strongly criticized by the international organizations. It is no surprise that in his address to the General Assembly, the President of Azerbaijan singled out several prominent international human rights organization and criticized them for condemning the human rights violations in that country.

Q։ Can you send a very direct message to the Azeri president?

A։ In fact, the message to the Azeri president has been sent several times by the Prime Minister of Armenia Nikol Pashinyan who made it very clear that any solution to this long-standing conflict must be acceptable to the people of Armenia, to the people of Nagorno Karabakh and to the people of Azerbaijan (he also clearly mentioned that this should be without prejudice to the order to the parties concerned). This very strong and very important message, however, has not been reciprocated by the Azerbaijani side. Instead, the recent instigation of violence by the leadership of this country gives very little assurance that they are able to reciprocate such a call. So, the message has been expressed loudly and clearly by the Prime Minister of Armenia. It has not been reciprocated, and the recent reckless attacks and aggression against Nagorno-Karabakhleads us to believe it will not be reciprocated any time soon.