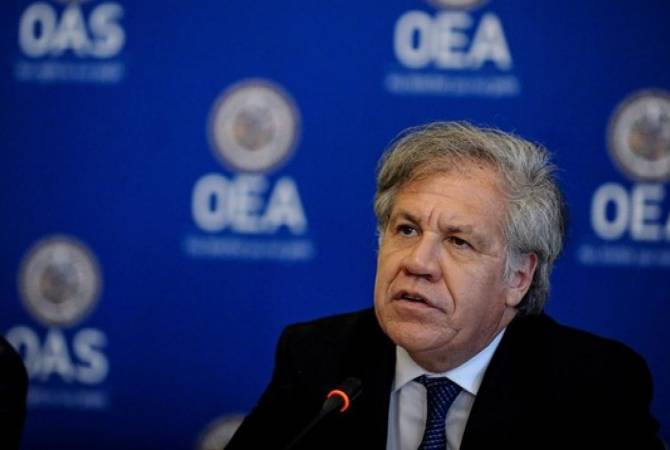 
YEREVAN, OCTOBER 3, ARMENPRESS. During the last five years the Organization of American States has followed closely the unilateral arms race of Azerbaijan, that escalation was undoubtedly the preparation for this armed aggression against Nagorno Karabakh. There is clear evidence of Azerbaijan’s full responsibility regarding the escalation of the conflict, Secretary General of the Organization of American States Luis Almagro said in his letter addressed to Azerbaijani Ambassador to the United States Elin Suleymanov.

The OAS Secretary General said he is writing this letter in response to the Ambassador’s reaction to the Organization’s declaration regarding recent military attacks on Nagorno Karabakh.

“During the last five years we have followed closely the unilateral arms race of your country; it was a matter of deep concern because that escalation was undoubtedly the preparation for this armed aggression launched by Azerbaijan. There is clear evidence of your full responsibility regarding the aggression and the escalation of the conflict. A statement was made by France with evidence that Turkey sent 300 ISIS-affiliated Islamists to join Azeri military in the conflict”, Mr. Almagro said in his letter.

He added that the United States Defense Department has confirmed the presence of hundreds of Syrian mercenaries from Turkey to support Azerbaijan. “Additionally, in the recent meeting at the summit of the Twenty-Seven in Brussels, European leaders have denounced any external interference. The proof related to the participation of the Turkish air force in the conflict is absolutely condemnable”, he said.

The OAS Secretary General noted that Armenia has already expressed their willingness to accept a negotiation. “It is now your responsibility towards international peace and stability to accept the same”, he stated.

Luis Almagro emphasized that the statement which the Ambassador referenced in his letter was issued by the General Secretariat of the Organization of America States which he has the honor to lead, and stated its strong condemnation of military aggression, especially those attacks directed towards civilians, and called for cessation of hostilities.

What I do consider incompatible with the principles of self-determination and peace and stability, are both the recent military attacks against civilians in Nagorno Karabakh and the foreign variables intervening and threatening a negotiation process”, he said.

He added that the Ministry of Foreign Affairs of Armenia has reported that civilian infrastructure is being targeted in Nagorno Karabakh. “According to the Armenian government, these criminal attacks against civilians were carried out by your country alongside Turkish military specialists. As we stated in our declaration on September 27, 2020, the practice of attacking civilians as military targets must be banished and constitutes a complete violation of most basic rules governing armed conflict”, Almagro said.

The OAS stands by its declaration regarding the recent military aggression in Nagorno Karabakh and reiterates the need to reactivate the negotiation process led by the authorities of the OSCE Minsk Group. “We believe that this conflict can only be solved through a negotiation process based on international law and the principles established in the Helsinki Accords”, OAS Secretary General Luis Almagro said, in the end offering his condolences to the victims of both sides.