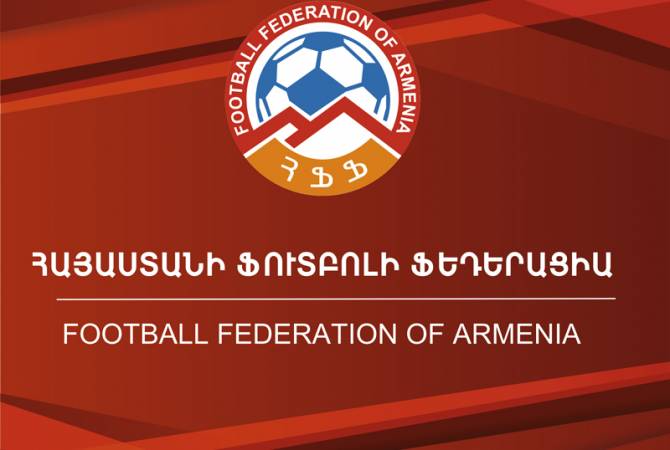 
YEREVAN, OCTOBER 2, ARMENPRESS. The Football Federation of Armenia (FFA) strongly condemns Azerbaijan's militaristic rhetoric on and off the football field.

The FFA issued a statement which says:

“Being loyal to the fundamental principle of apolitical status of international football, the Football Federation of Armenia has been neutral so far, avoiding any statements regarding the unleashing of war by Azerbaijan against the people of Artsakh.

Abiding by the statutes and defined regulations of UEFA and FIFA for situations alike, the Football Federation of Armenia filed a complaint to UEFA and FIFA regarding the political statements of Azerbaijan Professional Football League President Ramin Musaev. The complaint also refers to the publication of misinformation on the alleged killing of a 13-year-old youngster from the Azerbaijani town of Naftalan and the claims about a possible provocation by the Armenian side ahead of the UEFA Europa League qualifying play-off match between Legia Warsaw and Qarabağ FK.

Meanwhile, the representatives of Association of Football Federations of Azerbaijan, as well as the clubs of that country, are actively using the football platform for political statements, spread of misinformation, manipulation of facts and militaristic behavior on the football field. At the same time, the Azerbaijani armed forces are bombing Armenian civilian settlements, where the Football Federation of Armenia has recently inaugurated a football field for children. In particular, the small artificial field planted in the village of Mets Masrik (Vardenis community) is the best opportunity for kids to make first steps in football. It has been several days already, that Vardenis and Mets Masrik are being heavily shelled, obstructing people’s daily routine and the youngsters' possibility to play football. This is the shortest way to a humanitarian crisis.

The Football Federation of Armenia strongly condemns a similar approach by the Association of Football Federations of Azerbaijan and stays loyal to the fundamental principle of apolitical status of international football. At the same time, we urge members of the international football family to not give way to political statements of the Azerbaijani side and condemn militaristic rhetoric on and off the field.

P.S. Football Federation of Armenia has already informed all member associations of UEFA and FIFA about these actions of AFFA”.