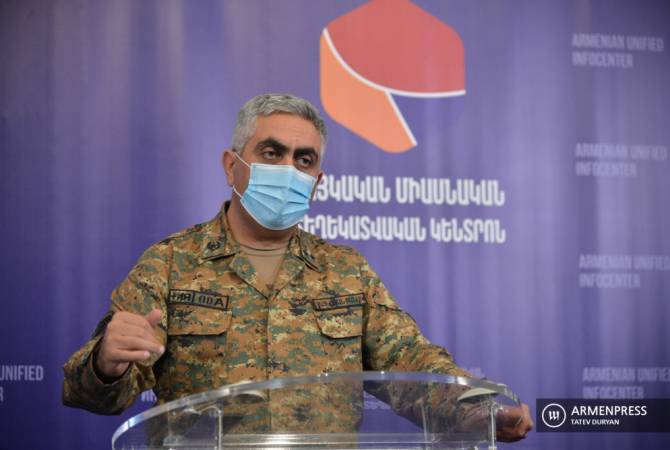 
YEREVAN, SEPTEMBER 30, ARMENPRESS. Armenia has solid intelligence about the Azeri air force arsenal and their capabilities, and since these Azeri fighter jets are unable to carry out their missions Turkish F-16s were brought in, the Armenian Defense Ministry spokesperson Artsrun Hovhannisyan said, adding that all the “refutations” will be debunked soon when they will release evidence comprising radio-technical intelligence.

He said that back during August 13-14 when the joint Turkish-Azerbaijani military exercises were completed the F-16s did not withdraw from Azerbaijan and remained stationed at the local airports. The defense ministry has raised this issue to relevant bodies, he said.

He said the evidence will soon be released.

The Turkish F-16s were conducting reconnaissance and tactical flights days before, he said.

“The F-16s were taken there because the Azerbaijani air force was unable to carry out those missions, they don’t have that level and experience, second of all, the Turkish air force also transported there other devices, for example the Bayraktar and other UAVs, which aren’t compatible to the MIG-29 or SU-25 – meaning they couldn’t have been used in terms of tactical situation management. And therefore they needed the F-16 to solve the compatibility. We understand very well, we have experience, that the F-16 is airborne, it is working and providing support to the Bayraktar, paired with an airborne radio-technical communication and guidance Turkish aircraft flying on the other side of the border. We know this very well, we know their call signs, numbers, we know how they are working in pairs. We know that only an F-16 was capable of detecting the SU-25 from 60km distance and from that altitude, because the pilots had experience and knew how to approach tactically. Not a single anti-aircraft measure was capable of detecting them at that moment, only the F-16 could. And the F-16’s AIM-120 and AMRAAM missiles have a range of up to 90-100 kilometers, only the F-16s are capable of doing so, the MIG-29’s missiles don’t have the capacity to down a SU-25 in those conditions, terrain and distance,” he said.

He said the Armenian side is willing to provide evidence to international experts.

The Armenian Ministry of Defense released images of the Armenian Air Force SU-25 jet which was shot down by Turkish Air Force F-16 on September 29 in Armenian airspace.

The SU-25 was on-duty above Vardenis, Armenia and was repelling the Azeri attacks on Armenian civilian settlements in the regions.

The Turkish F-16 took off from the Azeri Gyanja airport and shot down the Armenian plane from 60km distance and 8200 meter altitude.

The pilot of the SU-25, Major Valery Danelin of the Armenian Air Force, was killed.