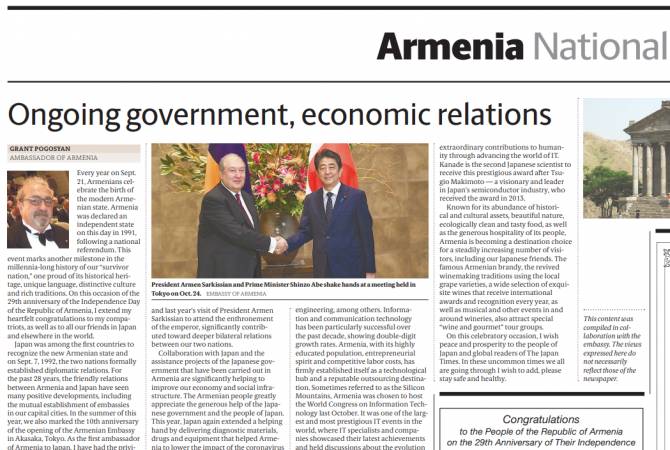 
YEREVAN, SEPTEMBER 25, ARMENPRESS. On the occasion of the Independence Day of Armenia, the article of Armenian Ambassador to Japan Hrant Poghosyan about the Armenian-Japanese relations has been published at The Japan Times.

In the article the Ambassador says Japan is one of the first countries that recognized Armenia’s Independence, and on September 7, 1992, the two countries have established diplomatic relations.

“Over the past 28 years many positive developments have taken place in the friendly relations between Armenia and Japan, among which is the establishment of embassies in the capitals of the two countries.

Our bilateral relations have been strengthened by various mutual visits. The recent two high-level visits – the Japanese Foreign Minister’s visit to Armenia in September 2018 and the Armenian President’s visit to Japan last year greatly contributed to the deepening of the bilateral ties between the two peoples”, the Armenian Ambassador said.

He highlighted trade, high technologies, mining industry, agriculture, tourism, information and communication technologies as spheres with a great cooperation potential. The Ambassador also praised the fact that Armenia, thanks to its rich historical and cultural heritage, amazing nature, ecologically clean and tasty food, as well as warm welcome of the people, has become a preferable destination for many Japanese people.