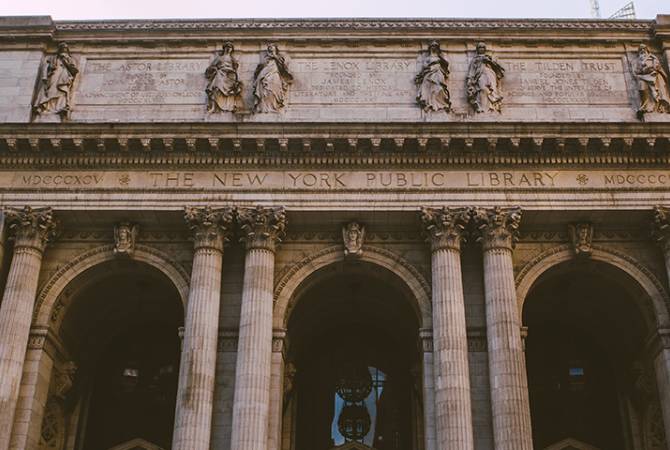 
YEREVAN, SEPTEMBER 24, ARMENPRESS. The Aurora Humanitarian Initiative is happy to announce the launch of “Gratitude in Action,” a series of celebrations planned to mark its fifth anniversary, the IDeA Foundation told Armenpress.

The series will kick off on October 19 with a live event broadcast at 7:00 pm local time from the New York Public Library in New York City, where the Aurora Humanitarian Initiative was launched in 2015 by Noubar Afeyan, founder and CEO of Flagship Pioneering, Vartan Gregorian, President of the Carnegie Corporation of New York, and Ruben Vardanyan, impact investor and social entrepreneur.

Hosted by well-known American journalists and anchorpersons David Ignatius and Judy Woodruff, the October 19 event will feature special interviews with Vartan Gregorian, member of the Aurora Prize Selection Committee, Aurora Humanitarian Initiative Co-Founder and President of the Carnegie Corporation of New York, as well as virtual performances by world famous cellist Yo-Yo Ma and legendary jazz musician and trumpeter Wynton Marsalis. During the event, the Aurora Prize Laureates and Humanitarians will be honored, with special awards and grants to be announced.

This not-to-be-missed virtual event invites thousands of supporters and partners from around the globe to tune in online and be part of this important gathering of thought leaders and humanitarians as they set the course for future Aurora impact. With respect to the global reach of the Aurora Humanitarian Initiative, within the next few days after the New York City event, audiences across the world will be able to watch repeat airings of the event in Spanish, French, Russian and German. The Armenian version is to be broadcast on Armenia TV on October 20, at 6:00 pm Yerevan time (GMT+4).

Additional events within the “Gratitude in Action” anniversary celebrations are set to take place in London, Moscow, Yerevan and other world capitals and will be announced in the coming months. On March 10, 2021, the series will culminate with an ecumenical liturgy in one of the cathedral churches in New York City, held to commemorate those who fell victim to the COVID-19 pandemic and to recognize everyone who made an important contribution to support the vulnerable.

The “Gratitude in Action” event series is set to raise funds from international contributors in order to increase the impact and reach of the Aurora Humanitarian Initiative and help continue the efforts of the Aurora Prize Laureates and the community of unsung heroes putting themselves at risk to save others.

The Aurora Humanitarian Initiative, founded on behalf of the survivors of the Armenian Genocide and in gratitude to their saviors, is transforming this experience into a global movement based on the universal concept of Gratitude in Action. By addressing real, on-the-ground challenges, the Initiative provides a second chance to those who need it the most. We believe that even in the darkest times, a brighter future is in the hands of those who are committed to giving others help and hope, and Aurora welcomes all who embrace this philosophy.

This eight-year commitment (2015 to 2023, in remembrance of the eight years of the Armenian Genocide 1915-1923) aims to promote global projects and support people who tackle the needs of the most helpless and destitute and do so at great risk. This is achieved through the Initiative’s various programs: Aurora Prize for Awakening Humanity, Aurora Dialogues, Aurora Grants, Aurora Index, 100 LIVES Initiative and #AraratChallenge.

The Aurora Humanitarian Initiative is the vision of philanthropists Vartan Gregorian, Noubar Afeyan and Ruben Vardanyan who have been joined by thousands of supporters and partners. Our Chair, Dr. Tom Catena, draws on his experience is a surgeon, veteran, humanitarian and the 2017 Aurora Prize laureate to spread the message of Gratitude in Action to a global audience.