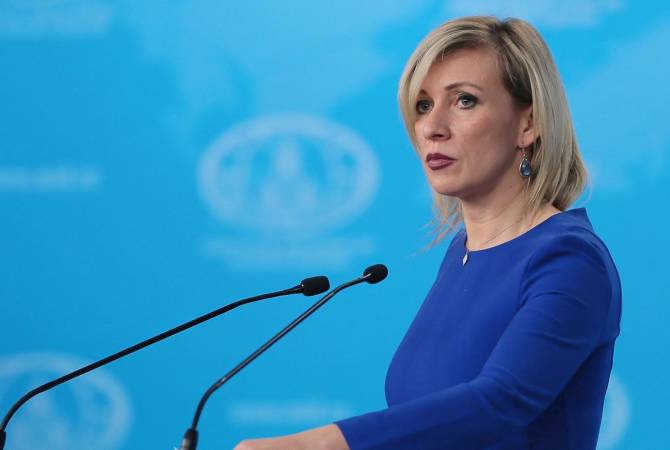 
YEREVAN, SEPTEMBER 23, ARMENRESS. Russian Foreign Ministry spokesperson Maria Zakharova has emphasized that it is the Russian foreign ministry’s official statements that should be taken as a basis, and not the commentaries of Azerbaijani news websites regarding the meeting between FM Lavrov and the Azeri Speaker of Parliament where the NK conflict was discussed.

Addressing the meeting between Russian FM Sergei Lavrov and Azerbaijani Speaker of Parliament Sahiba Gafarova in Moscow, the Azerbaijani news media unsurprisingly spread fake news claiming that during the meeting Lavrov announced “that Russia is in favor of the return of the 5 regions to Azerbaijan” and that “Armenian Prime Minister Nikol Pashinyan’s stance over the Karabakh conflict is hindering the peace process resolution.”

Neither the Russian foreign ministry readout nor the video from the meeting contain this information, with the only source being the state propaganda news media of Azerbaijan.

Maria Zakharova addressed the matter in her weekly briefings when asked by a reporter about the Azeri news reports: she noted that issues related to the peaceful resolution of the Karabakh conflict were discussed during the meeting. She said that Lavrov has not made any new statements.

“Everyone is well aware of Russia’s stance in the Nagorno Karabakh conflict settlement issue, and I ask you to be guided by this very stance and not by various comments made not by the Russian side,” Zakharova said.

She called for taking the Russian official statement as a basis.