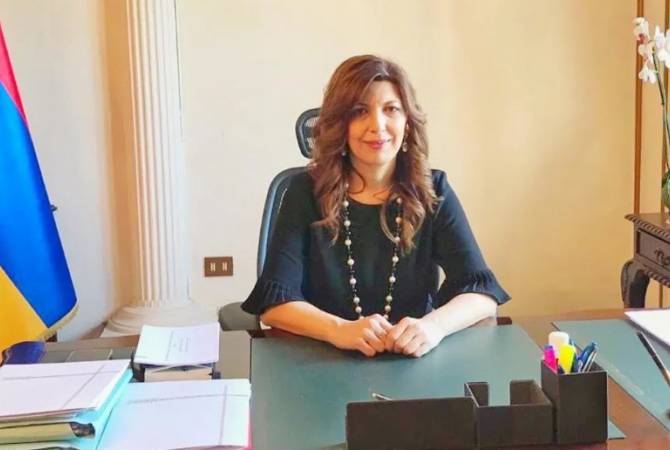 “Such kind of threats at best show the real face of that country. We view that statement as a manifestation of state and nuclear terrorism. That statement is a threat to all nations of the region, as well as to Azerbaijani people itself. The interesting part is that the Azerbaijani leadership tried to “justify” the statement made by the official representative of the defense ministry, as a statement made on emotional background. Of course, this in no way reduces the threat coming from Azerbaijan for Armenia, the Armenian people, as well as the Azerbaijani people”, the Armenian Ambassador said.

She stated that for many years Azerbaijan was expressing concern at various international organizations over the safety of the NPP, stating that it is located in a seismic zone, is old and so on. But now Azerbaijan threatens to demolish the NPP. “We believe that all these show that Azerbaijan’s all so-called concerns have a strong anti-Armenian direction. Unfortunately, human life in that country has no value”, she added.

Asked what is her call to the Italian authorities over the settlement of the Nagorno Karabakh conflict, the Ambassador said she firstly wants to thank the Italian leadership, in particular the foreign minister for the balanced approach over the NK conflict settlement.

“I highly value the balanced approach of the Italian side demonstrated during the whole period of the July events. The expectation from the Italian side is for it to continue demonstrating a balanced and impartial approach, support the peaceful negotiation process which is being held under the OSCE Minsk Group Co-Chairmanship”, the Ambassador noted.

According to the Ambassador, the recent escalation showed how demanded are the measures on strengthening security and trust.

Ambassador Hambardzumyan also talked about the Turkey’s role in this process, calling it unconstructive.

“Unfortunately, Turkey is becoming more dangerous as it has become a country exporting instability to various regions, be it in the Mediterranean, Africa or the Asian region. Currently Turkey is attempting to export that policy also to the South Caucasus. The unconditional support to Azerbaijan and their unconstructive role in the NK conflict are just one part of neo-Ottoman policy of today’s Turkey”, the Armenian Ambassador to Italy stated.