Pashinyan thanks Tavush residents for contributing to victorious battles of July 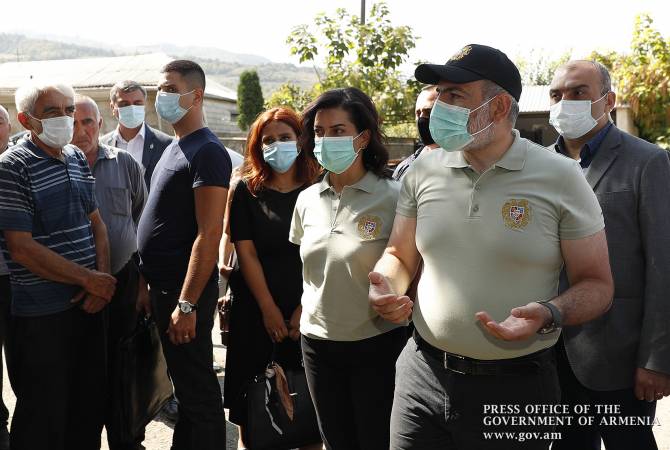 The Prime Minister and Mrs. Hakobyan first visited Chinari. The Premier talked to the locals, took note of their concerns and answered their questions. Nikol Pashinyan first thanked the residents of the border community for their strong support of our Armed Forces during the July victorious battles.

“First of all, I wish to thank you for contributing to the victorious battles of July, because if our troops had not been convinced that they had a strong backing, they would not have been so strong. First of all, thank you for that. Secondly, we acknowledge that the state must live up to its commitments in emergency situations. In general, we should support people in a way to strengthen their labor incentives, since very often the logic of charity is harmful.

It is extremely important for us to strike the right balance between the state’s obligations and the citizen’s liabilities. We must acknowledge that the solution to all problems goes through work in the Republic of Armenia. Each of us must try to solve our problem within the framework of our responsibility. The state is supposed to support the citizen, and the latter must back the state. No progress may be achieved, if the state leaves the solution of the problems to the citizen, and vice versa. The government must acknowledge and fulfill its commitments. In turn, the citizens must comply with their civic duties,” the Prime Minister noted.

The Premier believes that a special policy should be implemented in border communities. “What are we recording today? For the first time since the 90s, a house is being built from scratch in the village of Chinari. And you should not be anxious about the fact that the neighbor’s house is being built and not yours. Remember our motto: “Armenia is my home, the Armenian is my family,” the Premier said.

Coming to the opportunities available in border villages, the Head of Government noted that an important change has been made for women. When a child is born, the mother will be entitled to 50,000 drams as a monthly childcare allowance, while unemployed mothers will get 26,000 drams per month.

“For me, Chinari has been an exemplary community in recent years. Our task is to ensure that the 600 tons of figs exported last year turns into 6000 tons. The solution to your problems lies in the soil. Our task is to make your fig orchards a mechanism for you to print banknotes,” Nikol Pashinyan noted.

The village mayor advised that the problem of procurement has been solved with the figs harvested in Chinary being exported to the Russian Federation. In this connection, the Prime Minister stressed that the July victory should lead to Chinari’s revival, the revival of border communities, in general.

“We must overcome poverty. And this is what matters most now. Victorious people should be triumphant in themselves. It has nothing to do with what we have on our tables; it has nothing to do with the contents of our pocket. It is first of all a mindset. Once we change our mindset, the rest will be settled one by one,” the Prime Minister stressed.

Then the Prime Minister and Mrs. Hakobyan called at the site where a new house is being built for one of Chinari households. The house was ruined in enemy shelling, and a new six-room house with a bomb-shelter is being built with the government’s funding. Note that 12 shelling-affected residential buildings have already been rehabilitated in Chinari.

Nikol Pashinyan and Anna Hakobyan next visited Movses community. Road construction-related issues were discussed during a meeting held with the locals in the churchyard. For the first time, an asphalt road has been laid in the 300-year-old village.

Nikol Pashinyan stressed that this is the merit of law-abiding taxpayers. The Prime Minister emphasized that his government seeks to ensure that all roads are of equal quality from Abovyan Street in Yerevan to Movses village.

Aygepar was the Premier’s next port of call. The village has turned into a large construction site. Some thirty houses heavily damaged in shelling are being repaired or completely reconstructed at this point of time; all local streets are asphalted. Many locals who used to go abroad for work are involved in the ongoing activities. They thanked the Prime Minister and the Government for initiating such a large-scale project, which solves their housing and labor problems.

The Head of Government next visited Nerkin Karmirakhbyur community. The Premier inspected progress in the construction of the municipal alley and was shown the completely renovated 8 apartments, which had been damaged in shelling. Several local residents are involved in the ongoing activities.

In conclusion, Nikol Pashinyan and his spouse visited the Berd Fortress, where archeological excavations are underway at this point of time. The fortress is expected to become a tourist hub in the near future.