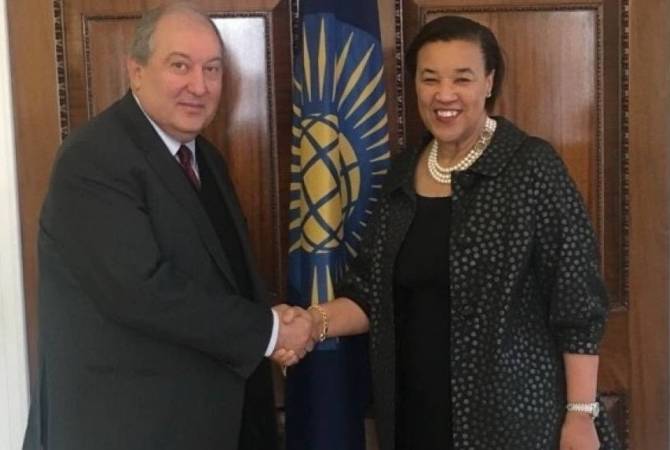 
YEREVAN, AUGUST 14, ARMENPRESS. President of Armenia Armen Sarkissian has sent a letter to Secretary-General of Commonwealth of Nations Baroness Patricia Scotland. As ARMENPRESS was informed from the press service of the President’s Office, President Sarkissian referred to the ‘’Armenian Summit of Minds’’ and ATOM (Advanced Tomorrow) presidential initiative, noting that that they are aimed at fostering technological and humanitarian development at an international level and can become an representational platform for new and unusual ideas and concepts.

The President invited Patricia Scotland to participate in the “Armenian Summit of Mind’’, scheduled on October 10-11 and will be dedicated to geopolitics and artificial intelligence. Emphasizing the great feedback from last year’s Summit, President Sarkissian hoped it will be a success this year as well.

Among the presidential initiatives aimed at the development of science, technologies and artificial intelligence, President Sarkissian referred to ATOM program, noting that it has already gained interest among global giant technological companies and preliminary cooperation agreements will be signed in the near future with some of them.

At the end of the letter President Sarkissian presented details about the Azerbaijani attacks against Armenia in the recent period, emphasizing that Azerbaijan violated universal values attempting to solve its short-term tasks in a period when the entire world has consolidated against the pandemic.

The Commonwealth of Nations, generally known simply as the Commonwealth, is a political association of 54 member states, nearly all former territories of the British Empire.

Editing and translated by Tigran Sirekanyan