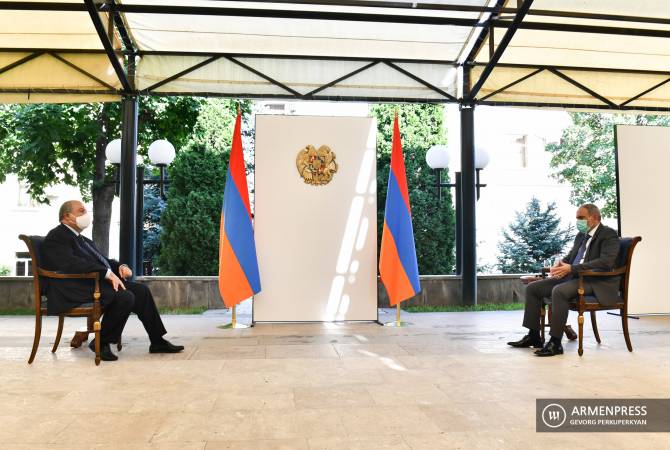 As ARMENPRESS was informed from the press service of the President's Office, Armen Sarkissian and Nikol Pashinyan discussed issues referring to the current problems facing the country and development programs.

The leaders of the country shared the opinion that despite the declining numbers of COVID-19 cases, it's necessary to strictly follow the anti-pandemic rules, given the fact that many countries have returned to strict limitations after seemingly overcoming the pandemic.

Referring to the social-economic situation of the country, Nikol Pashinyan noted that 70 thousand jobs had been cut in April, but by June 50 thousand jobs were already restored. ‘’It was clear for me that if were had been guided only by health factors, now we would be facing social collapse’’, he said, adding that for now the priority task for the Government is to preserve and create new jobs. He emphasized that 100 billions MAD have already been invested by the state and banking system in social and economic directions.

Referring to the developments in Tavush Province in mid-July, the President and the Prime Minister emphasized that it was a direct aggression by Azerbaijan against Armenia, violating not only international laws, but also moral boundaries, given the fact that the international community is struggling against the global enemy – COVID-19. In this context, the leaders of the country expressed satisfaction for that the Armenian Armed Forces were able to once again prove that they have the strongest army in the region.