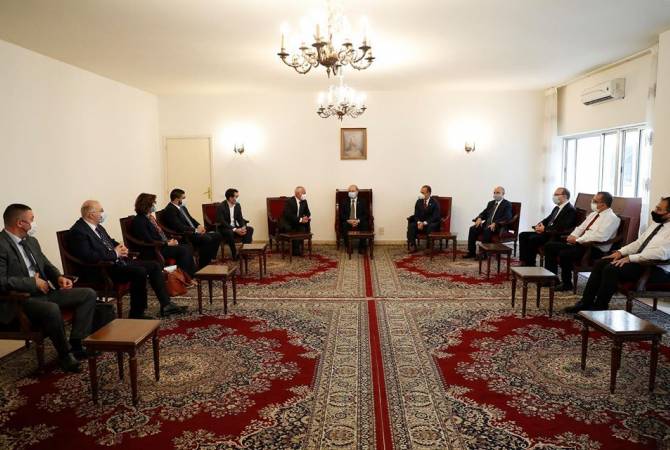 
YEREVAN, AUGUST 10, ARMENPRESS. The Armenian government delegation led by High Commissioner for Diaspora Affairs Zareh Sinanyan in Lebanon held a meeting with Rev. Megerdich Karageozian, the President of the Union of the Armenian Evangelical Churches in the Near East, and Paul Haidostian, the President of Haigazian University in Beirut. Armenian Ambassador to Lebanon Vahagn Atabekyan was also present at the meeting, the High Commissioner’s Office said.

Rev. Megerdich Karageozian welcomed the delegation and emphasized that it is an honor to receive them during the difficult days of the Beirut blast aftermath. “When I saw the relief plane with Armenia written on it, with Ararat in the background, I honestly got emotional,” he told the delegation. Karageozian presented the Armenian community situation, the pre-explosion economic crisis and its impact on the Lebanese-Armenians. He said that the August 4 explosion had also a huge emotional and psychological impact on Lebanese-Armenians.

Sinanyan presented details on the humanitarian mission and the scheduled additional planeloads of assistance from Armenia. He then addressed the Armenian government’s actions in the direction of repatriation process. The High Commissioner highlighted the creation of the Repatriates Integration Center by end of 2020 and the adoption of the Law on Repatriation, which is currently in the final phase of development.

After the meeting a tour was held at the Armenian Evangelical Church, where its famous stained-glass cross was completely destroyed from the blast. The delegation also visited the Haigazian University, which also suffered damages.