Armenian government delegation meets with Catholicos Aram I in Lebanon 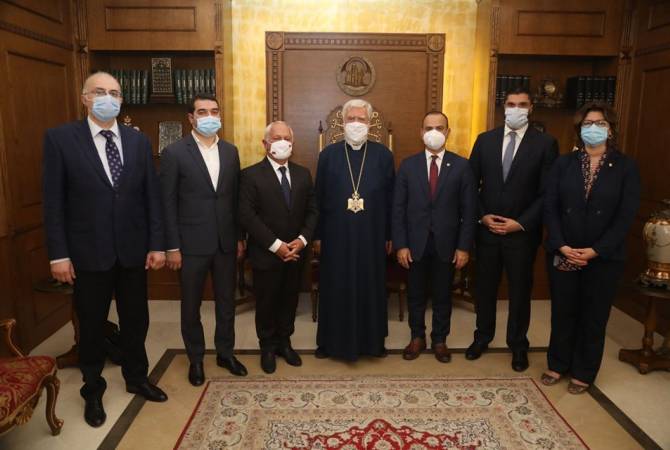 
YEREVAN, AUGUST 10, ARMENPRESS. The Armenian government delegation which traveled to Beirut on board the relief plane carrying humanitarian aid has taken part at a mass in Antelias served by Aram I, the Catholicos of the Great House of Cilicia in the Saint Gregory the Illuminator Cathedral.

After the mass, the delegation had a meeting with Catholicos Aram I. The catholicos presented the condition of the Lebanese-Armenian community after the Beirut blast. He said that the homes of many representatives of the Armenian community have been damaged and require speedy rebuilding, Sinanyan’s Office said in a news release.

Aram I emphasized the importance of prioritizing the needs of the Armenian community and said that a commission involving all community institutions is working on this matter.

Sinanyan noted that the purpose of the visit isn’t simply to accompany the humanitarian aid but to evaluate the situation on the ground and meet with the Armenian community.

The Catholicos noted in his remarks that parallel to strengthening Armenia it is important to strengthen the Diaspora as well. In this context Sinanyan attached importance to the fundraiser launched by the Hayastan fund.

“At the end of the meeting, both sides reiterates that the fatherland’s doors are always open for the Diaspora”, Sinanyan’s Office said in the news release.