Armenia and Armenians worldwide will not tolerate another genocide! - Ambassador Mkrtchyan's article 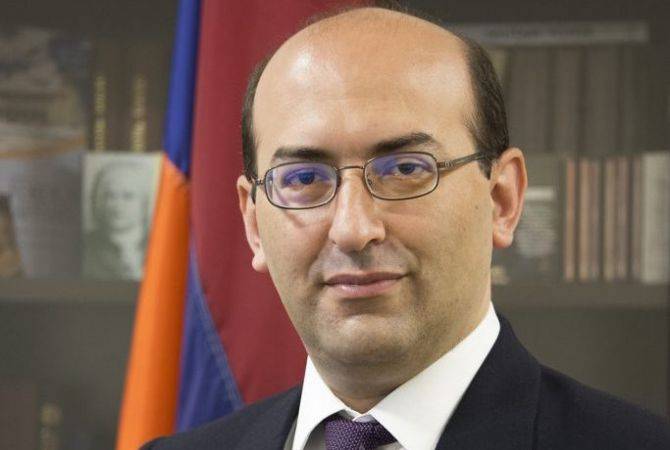 
YEREVAN, AUGUST 3, ARMENPRESS. The Latvian major internet portal DELFI has published the article by Armenian Ambassador to Latvia Tigran Mkrtchyan titled “Armenia and Armenians worldwide will not tolerate another genocide!”

Below is the English-version of the article.

“Victim blaming, or placing the responsibility of a crime upon its victim, is a common practice. It is essential to bullying and oppression. It has been used on a broad international scale. During the Holocaust, there were Nazis who used all possible means to shift the blame for the horrible genocide on the Jews themselves. Holocaust deniers have been known to do the same thing. Victim blaming was widely used by the Young Turks as they planned and executed the Armenian genocide. Victim blaming is still being used, today and now!

On July 12, Azerbaijan initiated an act of aggression against the sovereign territory of Armenia in the Tavush region, 150 km away from Nagorno-Karabakh. Its aim was to improve the Azerbaijani military positions, at the expense of the Armenian people’s, in those places where aggression was least expected. Azerbaijan’s armed forces also targeted the villages of Movses, Aygepar, Chinari, and Nerkin Karmiraghbyur in the Tavush region of Armenia with artillery fire and drones, causing significant damage to both the civilian infrastructure and residential houses.

There is evidence that Azerbaijan’s armed forces deployed artillery and armored vehicles in the courtyards and between residential houses in the village of Aghdam, which faces Armenia’s Chinari village. It is from these positions that the Azeris targeted Armenian villages, in order to make it look like Armenia retaliated against Azerbaijani civilian targets. Armenian Armed Forces did what any other state must do in similar situations: protect the sovereign territory of the homeland. And they did that successfully, once again confirming that money cannot always and everywhere buy an effective army, an axiom which the greatest strategic thinker of modern times Carl von Clausewitz would have advised at the beginning of 19th century.

Soon after the start of this failed aggression on Armenia, and the complete failure to improve Azerbaijan’s military positions, the President of that country - Ilham Aliyev – became despondent. Shortly after appointing the new Foreign Minister, Mr. Jeyhun Bayramov, the Azerbaijani President made a startling statement: “(…) some diplomats have betrayed the state, committed treason and do not conceal it. They are controlled by the secret services of the countries they live in. We have sufficient information.” Apparently, this mood swing in Baku has made some of its diplomats abroad very nervous and has even led them to become provocative.

Provocations “prove their patriotism” to their capital, where victim-blaming has long been the main feature of their “Armenian narrative.” In some capitals, including Riga, and in clear breach of local laws, anti-Armenian rallies laden with provocative statements were organized. This aggressive behavior led to clashes between Azerbaijani and Armenian communities in Moscow, Brussels, Warsaw, London, in various parts of the USA and other places. They also led to the desecration and intentional damage of Armenian property in the diaspora.

Three decades of Azerbaijan’s dehumanizing Armenians and Armenia within its borders have resulted in irrational hatred, which is now being exported abroad and is raising eyebrows everywhere. The July 14 pro-war rally in Baku, with its chants of “death to Armenians,” were sadly reminiscent of the Sumgait 1988 and Baku 1990 brutal pogroms of Armenians. When the English thinker Thomas Hobbes articulated his theory, that mankind is in a state of “war of all against all,” he was describing human life as it existed before civil society. When the German political theorist Carl Schmitt claimed that “the willingness to kill others for the simple reason that they are members of a hostile group” is the “ultimate degree of dissociation” in politics, he knew firsthand what he was talking about. He had lived through World War I. If we want to search for the roots of the Nagorno-Karabakh conflict, we must emphasize that this region has never been a part of the Republic of Azerbaijan. It was not within Azerbaijan when the latter declared its independence in 1991. Nagorno-Karabakh was not a part of Azerbaijan when it was first created in 1918.

How is that possible, you may wonder? The answer is quite simple. After the Sovietization of the region in 1920, Nagorno-Karabakh, against the will of its people, was included within the borders of Bolshevik Azerbaijan as an autonomous region, in accordance with the 1921 decision of the Caucasian Bureau of the Communist Party of Russia, led by Joseph Stalin. What is more, neither the above-said Bureau nor Stalin had the legal authority to make such a decision. Therefore, it is closest to the fact to claim that for 70 years the region of Karabakh was annexed to Soviet Azerbaijan. It is worth mentioning that in 1988, October during the 1st congress of the Latvian Popular Front, eminent Armenian writer Silva Kaputikyan said that the goal of the Armenian popular movement is to free Karabakh of its administrative subordination to Azerbaijan. The congress delegates expressed their support by unanimous applause․ (http://85.254.250.16/raksti/724770).

Now I would like to draw the reader’s attention to a few misleading points raised and used by Azerbaijan. The representatives of Azerbaijan are repeating ad nauseam that it was Armenia that “initiated the attacks” in order to “threaten the normal functioning of energy and transport lines, as Baku-Tbilisi-Kars railway, Baku-Tbilisi-Ceyhan oil pipeline” etc. hinting that Armenia is “threatening Europe’s energy independence.” I know that readers of such claims do not need to be informed about RMA (revolution in military affairs): the changes in the nature of warfare brought about by the innovative application of new technologies. Nor do they need to be reminded that in today’s world, an advanced military does not need to physically see a target in order to destroy it. Armenia, Nagorno-Karabakh Republic and Azerbaijan each have the capacity to target key infrastructures in each other’s territory. None of these countries needs to invade its neighbor or use ground troops in order to destroy a specific target.

What we must focus on is the difference between capacities and goals. Armenia’s main task is to ensure our sovereignty, our borders, the security of our country and people, and to promote global security. Armenian officials do not think – let alone speak – about attacking civilian infrastructures inside Azerbaijan. Yet quite recently, the world was shocked to learn that the Defense Ministry of Azerbaijan officially did not rule out the possibility that his country would launch a missile attack on the Metsamor nuclear power plant in Armenia. This unprecedented statement clearly shows genocidal intent and state-sponsored nuclear terrorism.

The President of Azerbaijan is preaching that Armenian leadership wishes by this conflict “to distract attention from internal problems.” Well, I think that we should not forget that one of the most important differences between Armenia and Azerbaijan is that the former is building a democratic state, while the latter is further falling into authoritarianism. The opposition forces in Armenia during the Azerbaijani aggression stood behind the Armenian Army, which was defending our country. In Azerbaijan, however, the clashes of protesters with the police were used as another pretext to silence “the internal enemy.” The Washington Post’s conclusion was to the point in this regard.  "Mr. Aliyev’s use of the iron fist to destroy his critics is the opposite of democracy and why everyone should worry about this intemperate tyrant." (https://www.washingtonpost.com/opinions/global-opinions/azerbaijans-president-aims-to-finish-off-the-political-opposition/2020/07/29/db4ca91c-d0f0-11ea-8c55-61e7fa5e82ab_story.html?)

Here again we come to the most important point. What can be done from now on to de-escalate the situation with effective short-term results?

The OSCE Minsk Group Co-Chairs (the USA, Russia, and France) have offered to establish an international mechanism of reliable ceasefire monitoring not only on the Line of Contact between Azerbaijan and the Nagorno-Karabakh Republic but also between Armenia and Azerbaijan. The mediators noted that “without such a mechanism, the sides will continue to blame each other for initiating deadly attacks on the Line of Contact and Armenia-Azerbaijan border” (https://www.osce.org/mg/185746). The Armenian sides have accepted this offer and continue to express support for its urgent introduction. Moreover, since the establishment of the ceasefire on July 16, the Azerbaijanis have on a number of cases violated the arrangements on cessation of hostilities. And, as they did in the 1990s, they are prone to attack and then blame the other side.

Secondly, Armenia has welcomed and reiterated its support for the UN General Secretary’s appeal for the establishment of a “global ceasefire.” Azerbaijan is silent on this account too.

Third, the OSCE Minsk Group Co-Chairs have urged and continue to urge the sides to refrain from inflammatory rhetoric. Unfortunately, we have witnessed a further exacerbation of Armenophobia in Azerbaijan and reckless hate speech. This must stop immediately! It is necessary for the authorities of Azerbaijan to publicly renounce the use (and threats of use) of force. Azerbaijani leadership should recognize that there is no alternative to peace talks.

Fourth, the entire international society needs to unwaveringly support the de-escalation of the situation, urge all sides to refrain from any action that might further escalate the situation. In this regard, Azerbaijan’s senior ally Turkey has been anything but constructive. An unprecedented level of threats against Armenia have been part of the Turkish reaction. Evidence of this are the joint Turkish-Azerbaijani military drills on July 29 to August. 5, which include mortars, armed vehicles, and cannons striking simulated targets as well as helicopters and warplanes in Baku, Nakhijevan, Ganja, Kurdamir, and Yevlakh (i.e. on the western and eastern borders of Armenia and not far from Nagorno-Karabakh). Clearly, these are not exercises of a defensive nature. The expanded geography of aggression against Armenia has been Azerbaijani strategy from day one of the conflict of Nagorno-Karabakh, when in addition to the war against Artsakh, Azerbaijan attacked Armenian borders from all its borders and imposed blockade together with Turkey, which continues to this very day.

The language of threats needs to stop! Armenia and Armenians worldwide will not tolerate another genocide!"