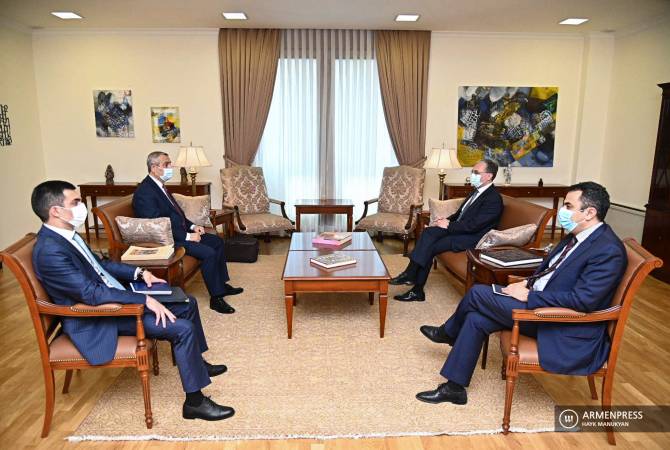 During the meeting, the sides touched upon the situation, created as a result of the armed aggression launched by Azerbaijan on July 12 in the section of the Tavush region of the Armenian-Azerbaijani border, when it directly targeted the civilian population and infrastructure of the border settlements. The Foreign Ministers emphasized that another attempt by Azerbaijan to deliberately escalate tensions in the conflict zone was a serious blow to the process of peaceful settlement of the Azerbaijan-Karabakh conflict, once again demonstrating the open contempt of the Azerbaijani authorities for their international obligations. In this context, the sides stressed the need to take active steps to deter the aspirations of Azerbaijan for unleashing a new aggression and to bring the authorities of that country to a constructive path. The Foreign Ministers emphasized the imperative of establishing international mechanisms for the reduction of risks of tension in the conflict zone and for controlling the ceasefire regime.

Masis Mayilian and Zohrab Mnatsakanyan reiterated the urgency of giving a new content to the security cooperation between the two Armenian states. In this context, they noted the need to develop the legal basis for cooperation in this area, taking into account the overall security challenges. In this regard, the sides highlighted the inadmissibility of a destabilizing policy in the region and the necessity of its resolute rejection.