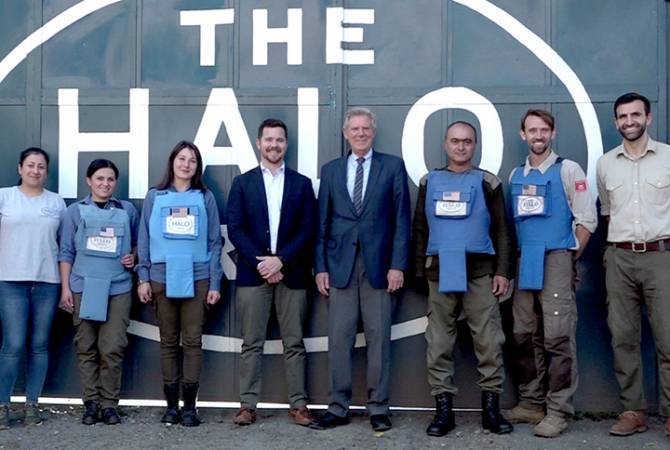 “We certainly welcome this report recommendation as a step in the right direction,” said Aram Hamparian, Executive Director of the ANCA. “However, in light of this Administration’s all-out attack on Artsakh demining, it’s clear that Congress will need to do more in the underlying foreign aid bill to ensure continued U.S. support for a mine-free Artsakh.”

Support for Artsakh demining was included in the House Appropriations Committee report accompanying the Fiscal Year 2021 Foreign Aid Bill, as follows: “The Committee recommends funding consistent with prior years for USAID’s Humanitarian Demining program.” The only USAID funded demining program currently in operation is in Artsakh, where The HALO Trust has successfully removed over 61,000 mines and cleared some 62,000 acres of land, ensuring a safer future for over 80% of Artsakh’s population. Congressional Armenian Caucus Co-Chair Frank Pallone (D-NJ), who visited Artsakh last year and met with representatives of The HALO Trust, was a strong proponent of the report language, along with his Armenian Caucus colleagues, including Co-Chairs Jackie Speier (D-CA) and Gus Bilirakis (R-FL), Representatives Judy Chu (D-CA), Devin Nunes (R-CA), Jim Costa (D-CA), Brad Sherman (D-CA) and others.

Congress has consistently pushed back against efforts to stop demining assistance to Artsakh, with over 30 Senators and 75 U.S. Representatives calling on key Appropriations Committee members to continue the assistance program, in letters sent in April and March of this year. Last year, 22 Senators and 89 Representatives cosigned bipartisan letters defending the USAID-funded HALO-Trust demining program in Artsakh. In 2017 and again in 2019 the U.S. House passed amendments supporting continued U.S. aid to Artsakh. In the lead up to today’s vote, one-third of U.S. House members testifying before the House Appropriations Committee cited Artsakh demining as a key priority for inclusion in the FY2021 Foreign Aid Bill.

The United States has been funding humanitarian programs in Artsakh since 1998, providing clean water to rural communities, support for maternal and child health, and life-saving demining assistance. Artsakh assistance has been long under attack by Azerbaijan’s Aliyev regime, and over the past two years, aggressively targeted by the Trump Administration, even as it ramps up U.S. defense and security aid to Baku.

Continued aid to Artsakh to support demining and rehabilitation efforts has been a key part of the ANCA’s 360-degree policy priorities to ensure Artsakh security and freedom. In testimony to the House Appropriations Committee earlier this year, ANCA Government Affairs Director Tereza Yerimyan argued that “The U.S. aid program to Nagorno Karabakh may require only a small expenditure, but it represents a major American investment in peace.” She went on to note that despite exceptional progress in The HALO Trust’s effort to make Artsakh mine-free, more needed to be done. “While the exact percentage of territory requiring clearance remains uncertain, The HALO Trust’s village-by-village resurvey has already identified 1.8 million square meters of additional contamination in the highly populated Martakert region, a figure that will certainly increase as the re-survey continues. All told, 385 people have been killed or injured by landmines or other explosives in Nagorno Karabakh since 1995, including several HALO trust employees in just the past few years,” explained Yerimyan.

Over 10,000 advocates have contacted Congress in support of continued U.S. demining assistance to Artsakh through the ANCA’s online action portals. ANCA Leo Sarkisian and Maral Melkonian Avetisyan Summer program participants have been rallying nationwide constituent outreach in support of continued Artsakh aid. Letters to Senate and House members can be sent by visiting anca.org/aid. Constituents can be directly connected to their U.S. Representative by phone through the ANCA’s Quick Connect system by visiting anca.org/call. Grassroots outreach to Congressional offices will continue until the FY2021 Foreign Aid Bill is finalized.

The FY 2021 Foreign Aid Bill and its accompanying report were approved by the Appropriations Committee by a vote of 29 to 21 and is scheduled to be taken up by the full House of Representatives soon. The Senate Appropriations Committee will be taking up its version of the FY2021 Foreign Aid Bill in upcoming weeks. The current measure did not specify amounts for direct aid to Armenia or Azerbaijan, allowing the State Department latitude to define funding levels and programs.