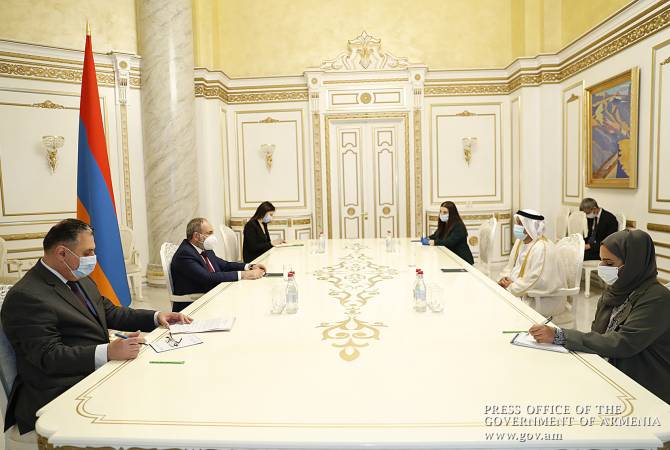 As ARMENPRESS was informed from the Office of the Prime Minister of Armenia, PM Pashinyan noted that the tenure of the outgoing Ambassador was an active and effective period for the relations between Armenia and the UAE. Nikol Pashinyan emphasized that Armenia is interested in the development and reform experience of the UAE. ‘’We hope that in the near future our country will become more attractive for the business entity of your country’’, PM Pashinyan said.

He emphasized that the political relations between the two countries are on a high level and thanked the UAE for its balanced position over Nagrno Karabah conflict.

PM Pashinyan also thanked the UAE for supporting Armenia in the fight against coronavirus and noted that it can be defeated as a result of close cooperation.

Ambassador Mohamed Al Qatam Al Zaabi thanked PM Pashinyan and the Government for the close cooperation, adding that he will preserve the close ties with Armenia and the Armenian people in the future.

The Ambassador noted that he is impressed by the effective activities of the young members of the Cabinet. Mohamed Al Qatam Al Zaabi emphasized that hi country is also interested in expanding relations with Armenia.

The interlocutors expressed confidence that following the coronavirus pandemic the partnership in various directions will continue to develop and progress by joint efforts.