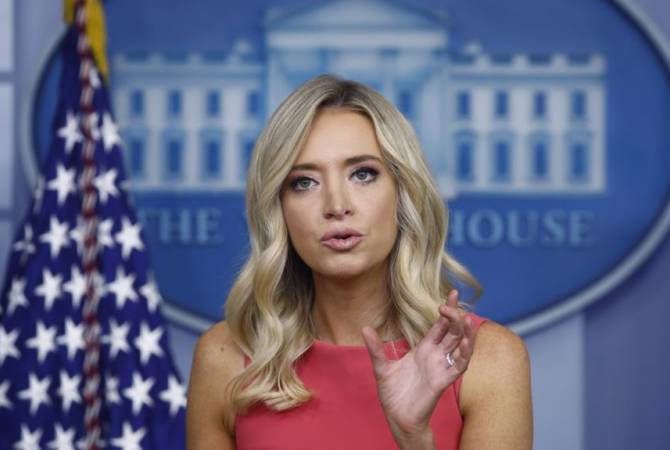 
YEREVAN, JULY 8, ARMENPRESS. The US administration’s policy on the issue of the Meds Yeghern has not changed, the White House told the Armenian service of Voice of America, commenting on the reference to the Armenian Genocide by White House spokesperson Kayleigh McEnany during a press briefing.

The White House said the administration’s policy on this matter has not changed, adding that the US President has reaffirmed that the Meds Yeghern is a historical crime and tragedy, and the US stands by the Armenian people.

On July 6 White House press secretary Kayleigh McEnany referred to the vandalism on the Armenian Genocide Memorial during her daily press briefing.

In the course of decrying protesters desecrating memorials across the country, White House press secretary Kayleigh McEnany referred to a memorial to the genocide by its proper name, Massis Post reports.

“There seems to be a lack of understanding and historical knowledge when the Armenian Genocide Memorial, remembering victims of all crimes against humanity including slavery, is vandalized”, Kayleigh McEnany said.

McEnany appeared to be referring to the Armenian Genocide Memorial outside the Colorado state Capitol in Denver, which was vandalized several weeks ago.

The White House spokesperson’s reference to the Armenian Genocide has been actively discussed in the press. Turkey also commented on McEnany’s remarks, stating that the position of the Trump administration on this matter is widely known.

Aram Hamparian, Executive Director of the Armenian National Committee of America (ANCA), also commented, stating: “We may be witnessing, in this one-off statement, the first steps toward an all-of-government recognition of the Armenian Genocide”.

While the two chambers of the US Congress – the Senate and the House of Representatives, have adopted resolutions recognizing and condemning the Armenian Genocide in 2019, the US government still refers to the 1915 killings as “Meds Yeghern”, refusing to call them genocide.