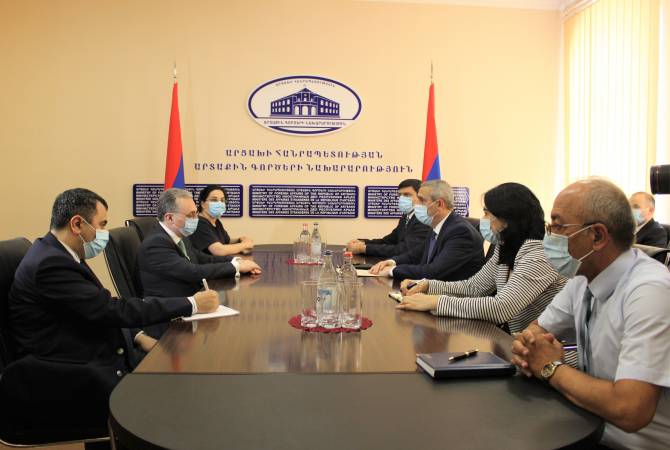 During the meeting, the sides touched upon a range of issues related to the current stage of the process of peaceful settlement of the Azerbaijan-Karabakh conflict. In particular, Zohrab Mnatsakanyan presented the results of the recent video conferences with the OSCE Minsk Group Co-Chairmen and the Foreign Minister of Azerbaijan. In this context, the sides noted the importance of taking practical steps to reduce the risks and to maintain stability in the conflict zone, aimed at ensuring the irreversibility of the peaceful settlement process. The Foreign Ministers stressed the inadmissibility of the bellicose and provocative statements recently voiced by the Azerbaijani authorities at various levels, noting that such rhetoric jeopardizes the peace process and hinders the formation of an atmosphere of confidence.

At the same time, the need for the full-fledged participation of official Stepanakert in the negotiations to increase the efficiency of the peace process was reiterated.

Then, the meeting was continued in an expanded format, with the participation of the senior staff members of the Foreign Ministry of the Republic of Artsakh and the delegation of the Foreign Ministry of the Republic of Armenia. The sides touched upon the process of implementation of the plan of consultations between the two Ministries. They noted with satisfaction the high level and practical nature of cooperation between the Ministries. They also exchanged views on the prospects of expanding the international relations of Artsakh and its involvement in international processes, as well as on the coordinated steps in this direction.