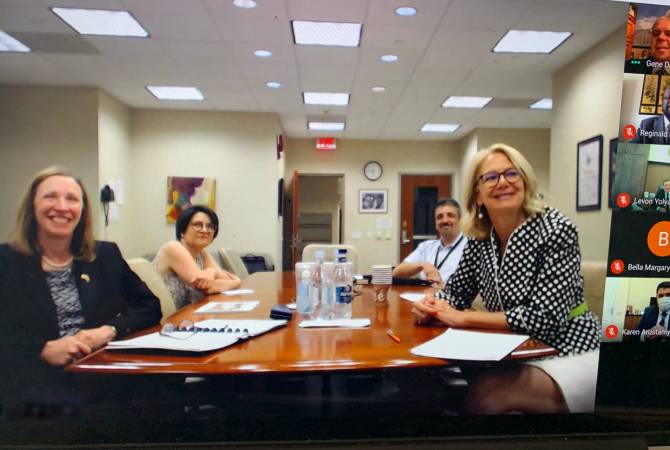 
YEREVAN, JULY 3, ARMENPRESS. An online event launched the $1 million, three-year “Technical Assistance to the Audit Chamber of the Republic of Armenia” collaborative activity on June 23. The United States Government, through USAID, signed an inter-agency agreement with the U.S. Government Accountability Office (GAO) Center for Audit Excellence to provide capacity building, training, and consultancy services to the Audit Chamber, the Supreme Audit Institution of Armenia. Through this activity, the GAO will also help implement the requirements of the 2018 Republic of Armenia law related to the Audit Chamber, directing them to adhere and adopt international audit standards. The Comptroller General of the United States and Head of the GAO Gene Dodaro and USAID Chief Financial Officer Reginald Mitchell who had planned to travel to Armenia for the launch prior to the COVID-19 crisis, instead virtually joined the Chair of Armenia’s Audit Chamber Levon Yolyan, U.S. Ambassador to Armenia Lynne Tracy and USAID/Armenia Mission Director Deborah Grieser to celebrate the launch, ARMENPRESS was informed from the USAID Yerevan Office.

“Today marks another significant milestone for the Audit Chamber. We now look forward to the successful partnership to help the Audit Chamber address some of the key issues identified and make improvements to strengthen its institutional policies and other procedures.” said Mr. Dodaro. This is USAID/Armenia’s second agreement with the GAO Center for Audit Excellence. Under the previous agreement, the GAO conducted a needs assessment at the Audit Chamber to evaluate its strengths, weaknesses and needs. This activity builds on the recommendations from the needs assessment and is in line with the Armenian government’s public financial management reform strategy.

“The role of the Audit Chamber is crucial in terms of strengthening the accountability, transparency and integrity of government institutions. This new activity is part of overall U.S. government support for the reforms initiated by the Armenian Government and its efforts to combat corruption. This activity will be implemented by the GAO, which is considered to be the “golden standard” for audit institutions around the world,” said Ambassador Tracy. The Audit Chamber plays an important oversight role in strengthening the accountability, transparency and integrity of government and public entities in the country, as well as influencing citizens’ confidence in public institutions and ensuring that public resources are used in ways that reduce corruption risks, maximize value for money, and deliver results. “As the head of the Audit Chamber, I would like to thank our partners for their valuable support in developing the Audit Chamber, especially in the midst of the pandemic,” said Mr. Yolyan. “This event is the result of the joint effort. We will try to get the most out of this partnership to be a more impactful institution.”