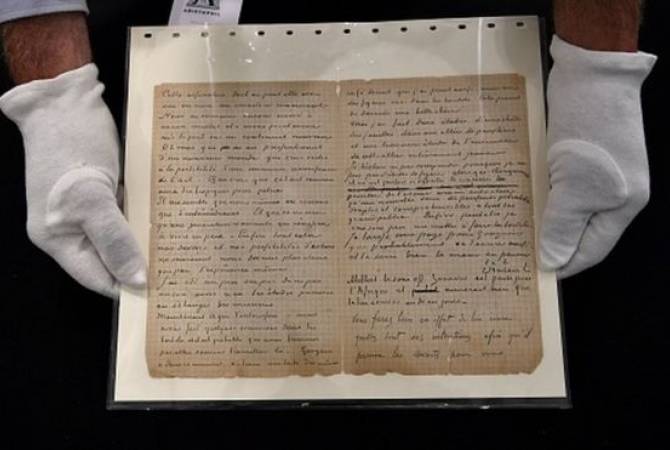 
A letter penned by artists Vincent Van Gogh and Paul Gauguin, which details their visits to brothels, has been sold at auction for €210,600, reports Armenpress citing CNN.

The letter was bought by the Vincent Van Gogh Foundation at the Drouot auction house in Paris on Tuesday. The artists wrote the letter to their friend, French painter Emile Bernard, in late 1888.Van Gogh and Gauguin, both post-impressionist painters who are famous around the world, were convinced they were leading a "great renaissance of art", according to the letter.

The artists honed their artistic vision in Arles but, after spending several months together, their friendship ended acrimoniously and Gauguin left.

Dated and signed 1-2 November 1888, the letter was written several weeks before Van Gogh suffered a mental breakdown and famously cut off his left ear.

The Van Gogh Museum in Amsterdam, where the letter will go on display later this year, said it was the only correspondence Van Gogh ever had with another artist. The museum described the letter as "the most significant document written by Van Gogh that was still in private hands".

The auction house, Drouot, said the letter was "exceptional" because of how certain the artists were that their painting would revolutionise art. Van Gogh and Gauguin, the auction house said, were "fully aware that their art marks a turning point and that only future generations will understand it".

The director of the Van Gogh Museum, Emilie Gordenker, said she was "thrilled" that the "important letter" had been acquired and could be put on display. "We are delighted and very grateful that the Vincent van Gogh Foundation has made it possible to add such a remarkable letter as this to our collection, especially in these challenging times," she said.

The artists take turns to give an account of their stay in Arles, where they worked together in a rented apartment at the Yellow House. "Now something that will interest you - we've made some excursions in the brothels, and it's likely that we'll eventually go there often to work," wrote Van Gogh in the four-page letter.

"At the moment Gauguin has a canvas in progress of the same night café that I also painted, but with figures seen in the brothels. It promises to become a beautiful thing." While the letter was addressed to their friend, it was also a dialogue between Van Gogh and Gauguin, who gave their first impressions of working together.

In the letter, Van Gogh described Gauguin as "an unspoiled creature with the instincts of a wild beast".

"With Gauguin, blood and sex have the edge over ambition," he added. "But enough of that, you've seen him close at hand longer than I have, just wanted to tell you first impressions in a few words."

From 9 October 2020, the letter will be one of 40 documents to go on display at an exhibition at the Van Gogh Museum in Amsterdam.