Denialism has no future: Armenia MFA comments on discussion of Genocide issue in Turkey 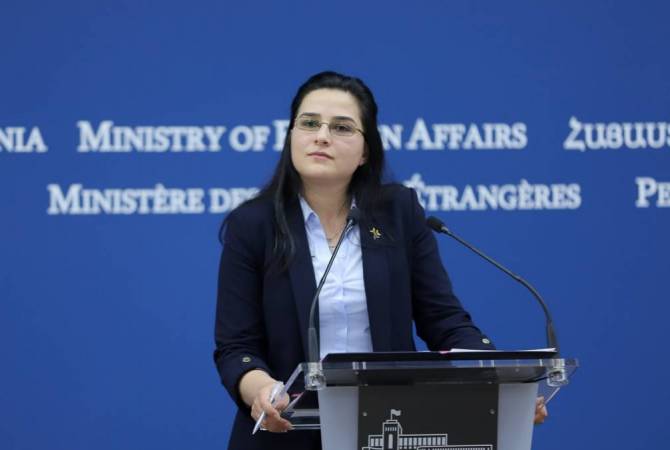 
YEREVAN, JUNE 18, ARMENPRESS. The Turkish President’s statements on justifying the Armenian Genocide and insulting the victims are not something new and are manifestations of hate speech which have an impact on strengthening the atmosphere of xenophobia against Armenians in that country, Armenian foreign ministry spokesperson Anna Naghdalyan said in response to the ARMENPRESS question, commenting on the discussion of the issue of the Armenian Genocide at the Turkish presidential administration.

-How would you comment on the fact that the highest advisory body at the Turkish presidential administration convened a session chaired by President Recep Tayyip Erdogan, and according to the official press release the session participants discussed the actions that should be taken against “the allegations against Turkey on the 1915 events”?

-The statements by the President of Turkey on justifying the Armenian Genocide and insulting its victims are not something new and are manifestations of hate speech which have an impact on the strengthening and maintenance of the atmosphere of xenophobia against Armenians in that country. The issue of the recognition and condemnation of the Armenian Genocide is not an Armenian-Turkish matter, it is an issue of Turkey and the international community. This is evidenced by Turkey’s numerous statements and actions over the recognition of the Armenian Genocide by this or that country. For us and for the international community the Armenian Genocide is a fact which has also served as a base for the development of the 1948 Convention for the Prevention and Punishment of the Crime of Genocide and the introduction of prevention mechanisms of genocides and crimes against humanity based on it. Denialism has no future, no matter who will package it and how. No matter how hard the Turkish authorities try to pressure the truth, the truth in any case has paved and will pave its way.