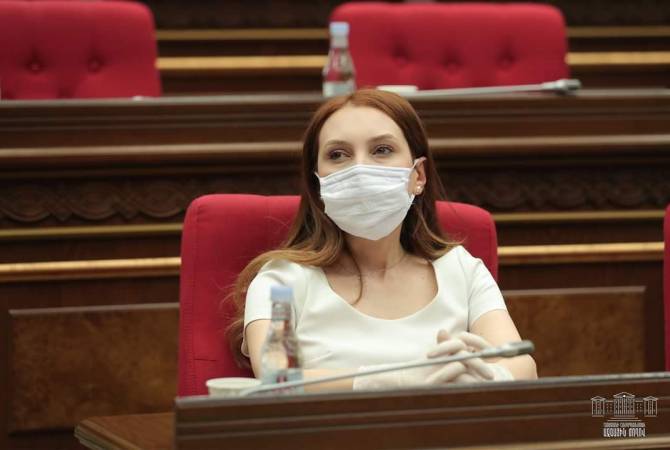 
YEREVAN, JUNE 1, ARMENPRESS. Head of the ruling My Step faction of the Armenian Parliament Lilit Makunts draws the attention of the international community to Azerbaijan’s militaristic statements, noting that the aggression unleashed by Azerbaijan will receive more than adequate and strong response at any moment.

“Recently Aliyev [President of Azerbaijan] made another militaristic statement which was followed by today’s threatening statement of Azerbaijani defense minister Zakir Hasanov where he in fact confesses that the 2016 April four-day war has been unleashed by Azerbaijan. I want to state that like in the 90s, in 2016 and at any other moment the response to the aggression unleashed by Azerbaijan is going to be more than adequate and strong”, the faction head said in her remarks at the parliament session.

She said the key task is to draw the attention of the international community to these statements as Azerbaijan constantly violates one of the three key principles adopted at the Minsk Group format, that is the principle of ruling out the use of force and threat of force. “In my belief, the international community, especially those international organizations responsible for keeping global peace, which recently made additional statements over the current COVID-19 pandemic, should not remain indifferent to such statements as indifference, which can make free Aliyev’s hands and lead to new escalation in the region, will receive a strong counter response and will have a devastating consequences first of all for Azerbaijan itself”, Lilit Makunts said.