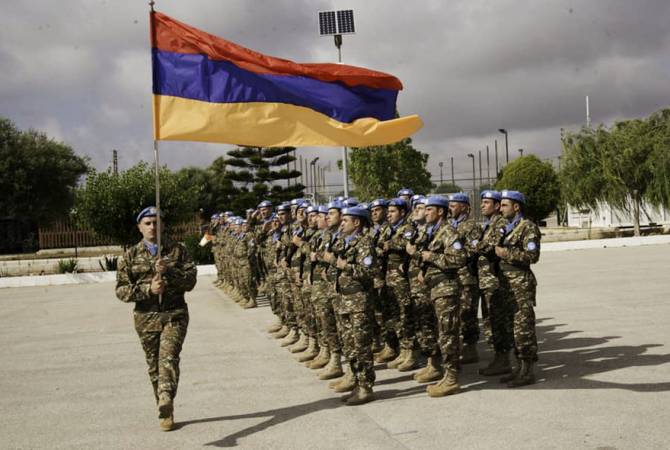 
YEREVAN, MAY 29, ARMENPRESS. The Armenian peacekeepers are fulfilling their tasks very professionally at different missions and are appreciated by both the local commanding staff and the leadership of the Defense ministry and the Armed Forces.

On the International Day of Peacekeepers, Commander of the Peacekeeping Brigade of the Armenian Armed Forces Artak Tonoyan gave an interview to ARMENPRESS.

He said they receive many letters of gratitude and words of appreciation by the international commanding staffs on the performance of the Armenian peacekeepers.

“And who join the ranks of the peacekeeping brigade in Armenia? Those servicemen and citizens who have passed the compulsory military service. Very few countries can have servicemen who served in combat situations, who have an experience for solving combat tasks which is one of the most important bases for successfully solving the tasks set before our peacekeepers during their missions, as well as their serious attitude towards the service. Of course, we are appreciated by both the local commanding staff and our leadership”, Artak Tonoyan said.

Commenting on the current situation around the globe caused by the novel coronavirus (COVID-19) pandemic, Tonoyan said regular preventive measures are being taken, and as of this moment no coronavirus case has been detected among the Armenian peacekeepers.

“From medical terms the divisions are under control. Peacekeepers are examined regularly and are being tested, as well as preventive measures are being taken”, he said.

As a full member of the United Nations, Armenia formed its peacekeeping troops in 2001. The first mission was conducted in Kosovo in 2004. Currently the Armenian peacekeepers – more than 200 servicemen, are conducting a mission in Kosovo, Afghanistan, Lebanon.