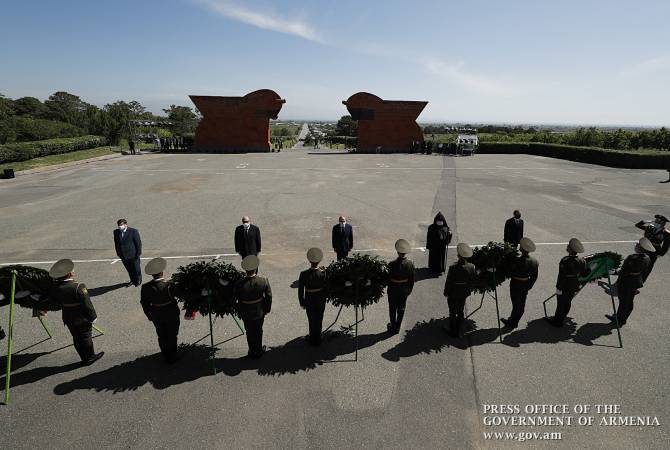 
YEREVAN, MAY 28, ARMENPRESS. The top leadership and clergymen of Armenia and Artsakh honored the memories of the heroes of Sardarapat Battle. ARMENPRESS reports President of Armenia Armen Sarkissian, Prime Minister Nikol Pashinyan, President of Artsakh Arayik Harutyunyan, Catholicos of All Armenians Karekin II and President of the National Assembly of Armenia Ararat Mirzoyan attended the official event dedicated to the Republic Day and the May Heroic Battles.

They laid a wreath at Sardarapat Monument and paid tribute with a Lord's Prayer.

Conditioned by the coronavirus pandemic the citizens of Armenia are not allowed to visit Sardarapat Monument this year.

On May 28 Armenians worldwide celebrate the 102th anniversary of establishment of the First Republic of Armenia and the historical victory in the battle of Sardarapat.

On May 28, 1918, with the victory in the battles of Sardarapat, Bash-Aparan and Gharakilisa, the Armenian people’s independence was restored which was lost over 9 centuries ago. 102 years ago, this day, the Armenian people, who survived the Genocide, entered into fight with the enemy not far from Yerevan for the sake of protecting the last inch of land of the Fatherland.

The battle of Sardarapat was decisive for the Armenian people. The entire people stood up for the defense of the Fatherland. Together with soldiers, families, elderly people, children, women were in the battlefield. Defeating the Turkish army in Sardarapat the Armenian forces managed to prevent the Turkish invasion in South Caucasus and save Armenia from total elimination.

On May 28, 1918, the Armenian National Council declared in Tbilisi the First Republic of Armenia.

Hovhannes Kajaznuni was the first Prime Minister of Independent Armenia.