We derive lessons from experience, achievements and failures of 1st Republic - President Sarkissian 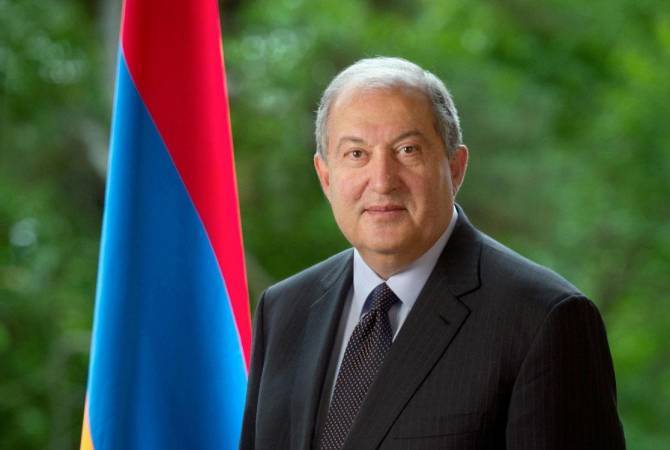 
YEREVAN, MAY 28, ARMENPRESS. President of Armenia Armen Sarkissian issued a congratulatory message on Republic Day. As ARMENPRESS was informed from the press service of the President’s Office, the message runs as follows,

Today, we are celebrating the Republic Day – the anniversary of the creation of the First Republic of Armenia.

Armenian statehood was reestablished in the most complex international situation, when the World War I was still raging, and Armenia – with its Eastern and Western parts – became one of its most ferocious frontlines.

Under the disguise of the war, Ottoman Turkey had already deported and massacred millions of Armenians and put into direct danger the very existence of the Armenian nation.

At that fateful moment, after the heroic battles against Turk invaders in Sardarapat, Bash Aparan and Karakilissa, on May 28, 1918 Armenian independence was declared.

The historic significance of the First Republic is invaluable.

Almost 500 years after the fall of the Armenian Kingdom of Cilicia, Armenian statehood was reinstated. It was a dream for multiple generations and the result of the centuries-long national liberation struggle.

A multiparty democratic system of government was introduced in the country, civil liberties, universal suffrage, including for women, were established.

Statebuilding was given a start, enlightenment, science, and education were impelled.
Able forces rushed to the Fatherland from all over the world to serve the newly independent state.

Armenia became a subject of international law; foreign relations were established, ambassadors and representatives of Armenia were accredited to a number of countries.

The creation of an independent and united Armenia, which on May 28, 1919 was solidified by the decision of the Parliament, was the quintessence of the centuries-long national struggle and ideology, as well as emanated from the geopolitics of the time which resulted in the Treaty of Sèvres of August 10, 1920.

Experience, achievements, and failures of the First Republic became lessons for us. The most significant of them is that we must rely on ourselves only and to be able to do it, we must form the ultimate national goal and unite around it.

The implementation of the ideology, in which Armenia is the geopolitical core for the entire nation, is the promise of a safe, secure and prosperous future for our people.

The vision of the united Armenia, which is being passed from generation to generation, has been uniting us for many centuries.

It is our great national pledge, our political and historical heritage.

Nowadays, it is being manifested in the form of Armenia-Artsakh-Spyurk triumvirate. Issues of a peaceful and fair resolution of the Karabakh problem, recognition of the Armenian Genocide and elimination of its consequences exist in that very vision.

History of the human race teaches that practical policies are conducted in line with the current conditions and opportunities; however the ultimate national goal is the driving force behind for the nation’s advancement and success.

One hundred years ago, with that goal in mind and weapons in their hands, our ancestors were fighting devotedly for the salvation and independence of Armenia.

After independence of 1991, Armenia reestablished its unique place in the world.

The present and future generations have to build a stable, developed and united Fatherland which will take under its auspice the entire Armenian nation.

Long live the Republic of Armenia!

Long live the Republic of Artsakh!

Eternal glory to all those who died for the Fatherland!

God save us all”.