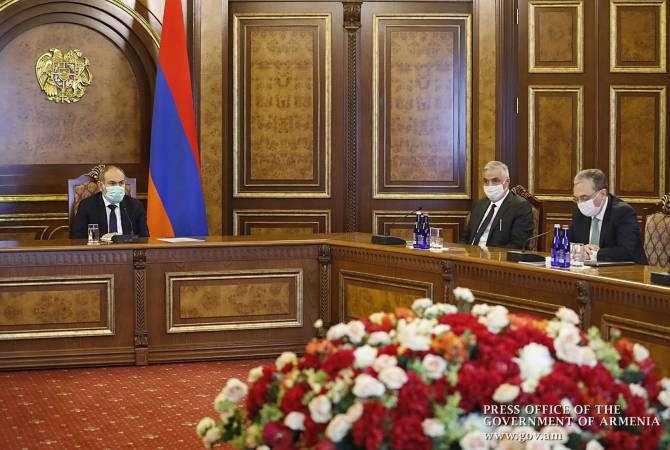 
YEREVAN, MAY 25, ARMENPRESS. Hearings on reports of 2019 activities of the public administration bodies continue in the government chaired by Prime Minister Nikol Pashinyan, the PM’s Office told Armenpress.

Today, on May 25, Foreign Minister Zohrab Mnatsakanyan reported the PM on the 2019 activity of the ministry.

In particular, the minister reported the works carried out on the directions of Armenia’s foreign policy priorities. He touched upon the actions taken for the peaceful settlement of the Nagorno Karabakh conflict, the international recognition and condemnation of the Armenian Genocide, the prevention of genocides and crimes against humanity, promotion of the agenda for protection of human rights, development of cooperation at bilateral and multilateral platforms. The minister said the Armenian diplomacy with its activity has affirmed that sovereignty is the most important principle of Armenia’s foreign policy and together with the two other principles – pan-Armenianism and mutual cooperation, it ensures the pursuit of the values and interests of the Armenian people at the international arena.

The FM introduced the steps taken to further develop the mutual partnership with Russia, the US, the countries of the European Union and the European continent, including with France and Germany, as well as with neighbors Georgia and Iran, the relations with the countries of various regions.

PM Pashinyan highlighted the development of relations with all partners and the implementation of consistent works aimed at fully utilizing and strengthening the potential of Armenia’s diplomatic service. He highlighted the necessity of expanding the economic component in the foreign policy process. “The foreign policy in all directions must be accompanied by presentation and involvement of economic projects”, he said. Nikol Pashinyan also emphasized the need to develop a new concept for fully utilizing the pan-Armenian potential, taking into account the changes and processes in the Diaspora in the past decades. He gave concrete tasks to the responsible officials over the foreign policy.