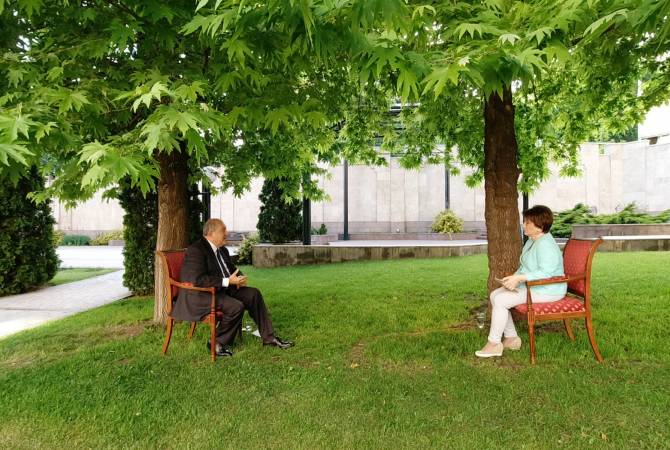 
YEREVAN, MAY 22, ARMENPRESS. President of Armenia Armen Sarkissian touched upon the Lanzarote Convention (the Council of Europe Convention on the Protection of Children against Sexual Exploitation and Sexual Abuse) which was ratified by the Parliament, as well as his future actions over it during an exclusive interview to the Yerkri Hartsy program of Yerkir Media TV, the Presidential Office told Armenpress.

“This is a sensitive issue because it concerns children, their protection, education, and has some nuances. The Convention has been signed by 47 countries, 45 of them have ratified it, starting from Russia up to the European countries. Our neighboring countries have also ratified it. Azerbaijan by ratifying made certain statements with three points, which, I think, will be under the spotlight of our foreign ministry”, Sarkissian said. “First of all, this a convention, not a law. As a person, as a President I would also like that a convention be a document which would give certain visions, a guideline what actions we should take under it, whether we have a concept or not”.

President Sarkissian said various countries adopt different approaches after adopting the Convention. “There are some countries which deal with education from the 7th grade, some from the age of 4, some countries stated that they will do experiments in five or ten schools. Some countries say that as the Convention clearly states that the education part must be acceptable by the consent of parents, let’s give that part to parents or implement it with their participation. Therefore, the opportunities are different. I don’t know on what path we will move, and this is a concern for me”.

As for the legal part, each law that is put on the table of the President, the President can sign it or send to the Constitutional Court within 21 days. “The Constitutional Court has already expressed its opinion that it doesn’t see constitutional contradictions, therefore, there is only one option for the President – to sign it. Even if the President doesn’t sign, it can be signed by the Speaker of Parliament. Therefore, whether I will sign it or not, doesn’t have a decisive role”, he said. “I hope the discussions over the Convention will become not the end of the public debate, but the beginning. This is very important because the talk is about our children. We differ a lot from the remaining 46 countries that signed the Convention with our culture. Each of them will adopt and create the solutions that are in accordance with their state, statehood, culture and visions on the future and children”.

The Council of Europe Convention on Protection of Children against Sexual Exploitation and Sexual Abuse, also known as “the Lanzarote Convention”, was signed  in Lanzarote, Spain in 2007.